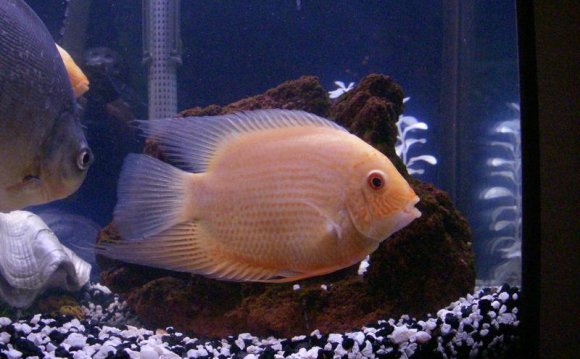 Fish reproduce by mostly giving eggs but there are certain small fish that are kept in aquariums that give birth to live fry directly- very much like humans. These fish are called livebearer fish and truth be told they are quite easy to handle.

Breeding these fishes require a certain environment and has a few minor demands. See how to setup your tank in the "tank settings" page.

The most common live-bearing fishes for aquariums are :
1). Guppy
2). Molly
3). Platy
4). Swordtails
These fishes are beginner level fishes and they breed easily with just a little amount of care. Perhaps the easiest to breed among these fishes are the Guppies. Here's a short guide of how to do so:
Guppy

After picking your fishes keep the ratio 2:1, two females for each male. Keep them in a tank and feed good quality food like Tubifex or Bloodworms. Live worms are the best if you can manage them, but it would be somewhat rare. After your fishes mature the male one will start chasing the females. Give them some shade and they will eventually mate. Within a month expect the female to give a litter of fish. Now comes the difficult part.

The female will have a large stomach when pregnant making it quite obvious. Separate the female in an isolated tank as the male will eat the babies as soon as they come out(what a horrible father!). Keep it in a place with some hiding places~preferably bushy plants for them to hide as the mother will also try to eat them.This is all you need if you just want to breed them for the fun of it. If you want to breed the expensive really colourful ones then you have to work a bit more. Send me a feedback or leave a comment and I will put it on the page.

Select good breed males, the colour of the body and shape will tell you~simply put the good looking ones for best results. Be careful as the female must also be healthy. Generally healthy females tend to be a lot bigger than the males.

One of the most important points to remember when breeding guppies is the the offspring will most likely have the tail pattern and tail shape of the parents. If you have parents of different colour then the tail patterns of the fry may be either of the two or a different mixture(in case of codominance). The very same rule applies for tail types. A small fraction of fry might show no resemblance to parents at all. This can be due to the wide gene pool of the fishes and is nothing to worry about.

These fishes are quite similar to guppies in size and action. They come in a wide variation of colours as well the most common ones being : 1) Moontail 2) Balloon 3) Dalmatian

If you have live plants they will provide hiding places for the fry and adults may graze on them sometimes. Expect fry count to be within 25-50 given you take proper care. Feeding methods are the exact same as the Guppy feeding. The males will eat the fry when they come out so best separate the mother, or have bushy plants which provide lots of hiding places.

Platy are available in a wide range of colours and will interbreed easily in any community tank but the fry will almost always be eaten by the other tank mates. They grow about up to 2 inches in length, these are hardy fishes and doesn't require much care thus making them good beginner fishes. But they will graze on your aquatic plants sometimes as well as the algae. Breeding conditions are slightly alkaline pH of 7.4-8.2 with a temperature read of 21-26 degrees. Generally it is best to keep a higher population of females than males for platys as well, with a ratio of 2:4 male:female.

Female platys can store unencapsulated sperm aggregates, called spermatozeugmata; these are used to fertilize eggs for a long time after spawning. As a result females are able to release up to six broods following a single mating. Removing the males from the tank for a period of time is a strategy used by a number of hobbyists to ensure birth control.Females will give birth to live fry directly and a pregnant mother would be obvious at sight having an enlarged abdomen.

Young platys grow fairly fast without much effort from the hobbyist. Within 2 months they grow to a length of about 2cm. But the major drawback of platys is that they excrete a lot of waste for a small fish and is extremely messy~ so they aren't very popular among Aquascapers.