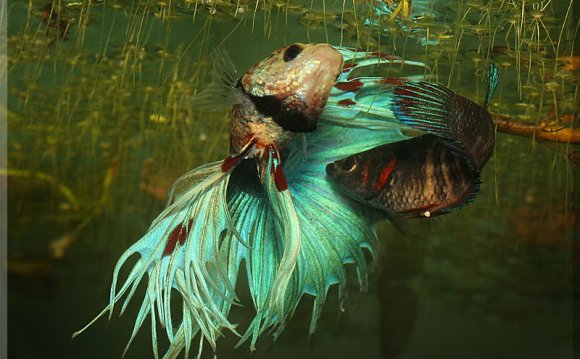 Food for fry
Before you even consider spawning a pair remember you are going to have up to 200 little fry
to feed. Be prepared, we feed our fry for the first 4 weeks with Microworms. There are a lot
of feeds available to feed fry decide before you spawn which you are going to feed.

Conditioning Pairs for spawning:
All our fish are fed Live and Frozen foods all the time so we don't have to condition just for
spawning. If you are feeding your Betta dried food feed them Frozen Bloodworms and Daphnia
as much as they can eat for at least 2 weeks before attempting to spawn. We use Hiakri brand
frozen food as we have found their product to be the best quality.

Tank Setup:
Clean tank well and rinse in very hot water. Full with fresh water add well used sponge filter and
cycle for 2 weeks. For us this is different as all out tanks are joined to a central trickle filter so
we turn on the valve and cycled water is automatically added to the tank. Place half a Styro cup
up against the front of the tank and plants in a corner at the back. This can be Live or artificial
plants, we also add floating live plants. Live plants are better as they help with water conditions
by changing ammonia and nitrates to nitrites. We use 10 gallon tanks divided in half with pexie
glass(acrylic plastic). Our water temp is 80F and pH 7.2 if your pH is lower or higher by a few
points let it be.

Adding pH up or down is very stressful to the fish and very difficult to control.
The only thing we add to our water is Liquid Calcium as in our area there is not enough calcium
in the water. We use it straight out the tap aerated for 24 hours before adding to the tanks.

Introducing the Pair
Weather plays a big part in how quick a pair will spawn We do generally wait for air pressure
to drop IE. for a storm front to roll in. We have found if it is hot humid and the air is still for
days and days spawning will take longer. So rather than put the pair through more stress than
necessary we wait for the weather to cool. We place the male and the female in the spawning
tank around 2pm. Male loose and female in the container. After feeding and just before light
out that night we release the female, we do not wait for the male to build nest if he has one
started or not does not matter.

Some males never build a nest, some do during spawning and
some after. 9 times out of 10 the fish are spawning by 10 am the next morning. We do not feed
spawning fish but we do feed the pair in the morning if they have not started the spawning process.
As the pair are introduced to the spawning tank there will be a lot of flaring and showing of from
both fish. The female will get vertical bars on her body his is a sign that she is very willing to spawn.
If the female does not respond to the male by flaring back at him and cowers in the corner she is
removed and tried again in a few weeks. Sometimes it does take the female awhile to realize that
she is safe in her little tank and will start responding to the male. We do prefer the female
responding within the first 5 minutes and if we are not desperate to spawn the pair in a hurry we
will remove her immediately and try again at a later date. You will find if the female has not
responded by the time you release her the spawning will take a few days to start and she will come
out the spawning tank pretty beaten up..

Females Responding to the male by flaring and barring up.

The spawning pair is left alone we have found the less they are disturbed the better the spawning
process is less nipped fins and other problems. The only time we will ever remove fish is if the
female starts nipping the male, this is not tolerated in our fish room and we have found if the female
starts nipping the spawn will not happen this time round. A badly bitten male can be effected for life
and will have future spawning difficulties. Occasionally as you release the female she will take a few
bites this is quite normal but if it has not stopped in the first 5 mins which is usually does she should
be removed. As you release the female the pair will flair and dance for each other but after a short
time the male will chase the female of and she will go and observe the male from behind the bushes.
If she is ready for spawning she will come out every now and again and dash up to the male with
her head down and until he is ready he will keep chasing her of. By this time the male usually has a
nest going and will be busy under the cup building the nest, he will leave the nest every now and
again to chase the female. When he is ready he will hang under the nest looking up he will swim of
occasionally looking for the female but this will not me as aggressive as it was when he was not
ready. He will swim out as if to entice her to the nest. When they are both ready and the female
plucks up enough courage she will dash up to the male and start nudging the male in the side as