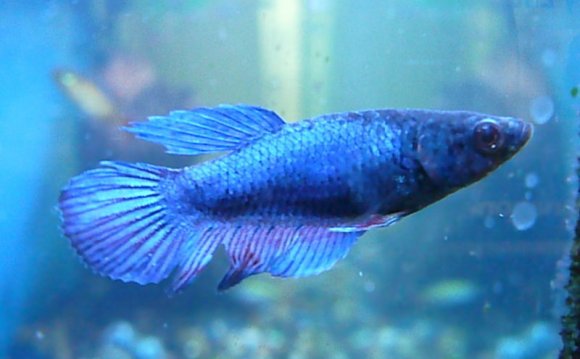 Bettas Are Carnivorous In Nature

Generally, Betta fish are carnivores (or, to be more exact, insectivores). They prefer to feed on insect larvae, worms, fish pellet and flakes. They also feed on eggs of insects occasionally. In general, if you see Bettas feeding off of plant roots and such, it means they're very hungry and unable to find the insects they crave for.

Betta fish derived their name from an ancient warrior group from Thailand, and were given the name in the 1800s once they became popular for their fighting skills. In those times Betta fish fights were a popular sport - so popular, in fact, that the King of Siam decided to have them regulated and taxed. Bets were placed on the bravery of the Betta fish during fights rather then on the damage inflicted.

A fish's lifestyle is greatly determined by the positioning of its mouth. Downward-facing mouths, such as those found on Catfish and other bottom-dwelling fish, enable them to feed near the ground, from sand, rock surfaces, etc.

Betta fish have upturned mouths, a position known as the 'superior mouth' when it comes to fish. It enables them to efficiently feed near the water's surface, allowing them to catch mosquito larvae and small insects from the floating vegetation.

They Build Bubble Nests To Help Protect Their Eggs

Preparing the space for the arriving eggs is the responsibility of the male Betta. They will make bubble nests for the eggs by taking in air and then spitting out a bubble embedded in the spit.

This process comes instinctively to male Bettas, and they might even engage in this behaviour if there are no females present around them.

Bettas Can Be Fooled By Mirrors, Believing Their Reflection To Be a Rival

If you place a mirror in front of a Betta, it will see its own reflection and think it to be a rival. Instantly it will go on a fighting spree, waving fins and moving about. Once the mirror is taken away, the Betta will feel triumphant, thinking that the fight has been won.