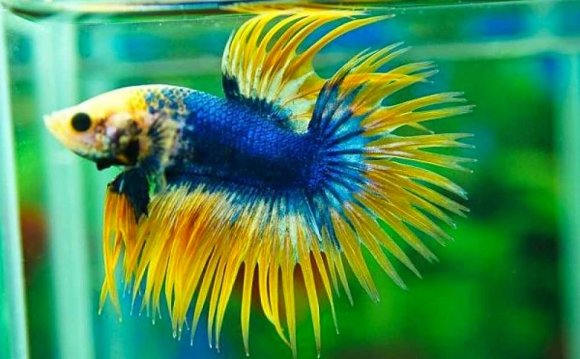 Siamese fighting fish (Betta splendens), sometimes simply called Bettas, are those pretty fish you often see swimming all alone in tiny bowls at pet stores and carnivals. They’re highly aggressive and territorial but strikingly beautiful, seemingly disposable the way they're often treated and kept, but they have a long, rich history. If all you know about these fish is that they fight, here’s a crash course in all things Betta.

Like Siamese cats and the famous Siamese twins Chang and Eng Bunker, Siamese fighting fish originated in Siam, the nation that became Thailand in the mid-20th century. The fish are native to the central part of the country, but there are also populations further north and south and in nearby countries like Laos, Vietnam and Cambodia.

2. THEY'VE BEEN BRED TO FIGHT FOR CENTURIES.

According to the International Betta Congress, a global club for Betta keepers and breeders, no one is sure how long people have kept Bettas in captivity, but the tradition of breeding and fighting them goes back at least a few hundred years in Thailand/Siam. People took note of how the wild fish were highly territorial and attacked other fish that encroached on their space, and began arranging fights between the fish as entertainment.

3. THE FIRST FIGHTING FISH IN EUROPE WERE ROYAL PETS.

By the 1800s, Betta fighting was such a popular pastime in Siam that even the country’s monarchs kept the fish and watched them battle. In 1840, King Rama III gave a few fish from his collection to Theodor Cantor, a Danish zoologist and doctor. Cantor brought them home to Europe, where they were bred and introduced to aquariums around the continent.

After introducing the fish to Europe, Cantor gave the species a formal scientific description and name. A few years later, though, ichthyologist Charles Tate Regan realized that Cantor’s choice of name—Macropodus pugnax—was already assigned to a related species. In 1909, Regan renamed the fighting fish Betta splendens, drawing from both the Malay language of Southeast Asia (: “enduring fish”) and Latin (splendens: “shining”).

Wild Bettas are normally drab brown or olive in color, but can take on more intense colors as signals of aggression or as part of their courtship. After the fish’s introduction to the West, European and American breeders developed the range of colors seen in pet bettas today, from intense reds to pastel blues, through careful selective breeding.

Because their native waters are often still or slow-moving with little dissolved oxygen, Betta fish have evolved a labyrinth organ that allows them to breathe in air from above the water’s surface.

During the dry season in their natural habitat, Bettas can make do in the beds of dried out streams and ponds by retreating to cavities with a little bit of water or even burying themselves in the muddy bed.