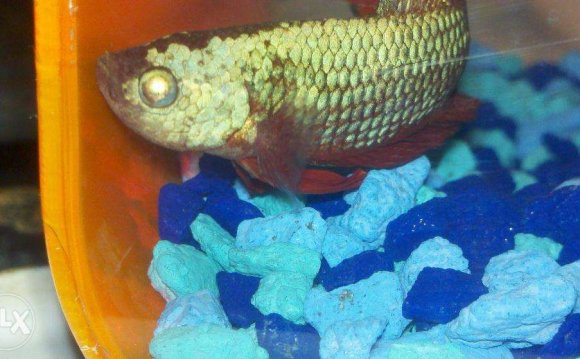 Well this pairing paid off! Female was conditioned for just under 2 weeks and is just a female I picked out at the LFS. She had some nice subtle metallic hues to her that I thought were pretty interesting. I originally was going to pair her with a Copper Metallic Male but decided to make a gametime lineup change, swapping with a Red Devil Metallic male.

The male was obsessive with his nest, choosing a small piece of bubble wrap over the styrofoam. He feverishly worked on it while the female looked on. He would take occasional breaks to flare and show off, but he was a busy dude.

After a couple days, and a female bursting with eggs I decided to put them together. Day 1, male showed a lot of aggression if she came near his nest. Day 2, male still chased her and she had a few chunks missing from her fins.

But late morning the male was receptive to her advances and they spawned. The whole thing took about 3 hours until he no longer tolerated her near his nest.

Removed the female and gave her a few white worms for her efforts.

Male is doing a great job looking after the eggs, constantly tending them and making sure they're all nestled into his masterpiece.