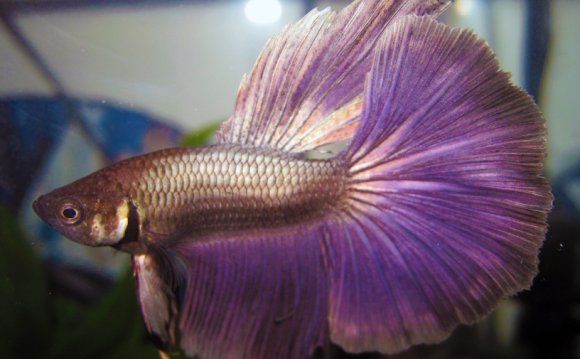 By Rose (aka Chickadee)
More Betta Information in the Betta Forum

Those of you who know me know that I have 3 Bettas and have nearly 24/7 with them. They are members of my family, my children in a funny kind of way. They challenge me, they make me laugh and there have been times when they have been the cause of great distress in my life. These are the times we are going to talk about here. These are the times we want to hear about.

There is a lot to raising a Betta, and raising a Betta is exactly what you do. When you go to the Local Fish Store or go online or wherever you get your Betta, you are getting a fish (especially the males) that has been raised as few fish are. There are reasons a Betta will not react as pretty much any other fish in your fish tank to the other fish in your tank. He has never been around other fish since he was a fry. Soon after it was determined that he was a male he was removed from the tank and placed in an individual jar or some other small container so he would not fight to the death with others of his kind. He simply does not know that there are other fish who are ALLOWED to be in with him. Well, I am not going to go into the whole Betta psychology now. How about a few basics::

BETTA TANK
Contrary to popular opinion a Betta cannot live in a BETTA BOWL or such similar sized tank. I would say the minimum for a truly happy Betta is 5 gallons. The Betta bowls or cute little containers they have come up with now are impossible to heat or filter and we will come to that momentarily, but Bettas are Tropical Fish and as such, need to be kept in heated and filtered water.

BETTA HEATER
Being Tropical Fish, Bettas need to be kept at a temperature of 78 degrees F (25 degrees C) at a MINIMUM on a consistent basis. It would be much better to aim for 80 degrees F (26 degrees C) to make them even happier. This is very important as the Betta seems to be especially prone to some of the cold water conditions such as Ich and Finrot. These diseases are primarily prevented by keeping the tank temperature at steady and proper levels. and water parameters good.

BETTA FILTER
Here again, because the Betta is a Tropical Fish and especially because you love your fish and do not want to subject him to having to live in a sewer, you need a GOOD filter in the tank you will be housing him in. This means chemical, biological, and mechanical filtration - no undergravel filters (UGF). There are a lot of types of filters out there but not all of them are appropriate for a Betta. Bettas are not given to being in a strong current so you need to find a filter that is adjustable to the degree that it provides a ripple or small waterfall - not a torrent. They do like some movement to the top surface of the water as they are one of the Labyrinth fishes. These fish have an organ on the top of their heads that not only allow them to breathe air like we do, but demands it. So if dust, scum or anything else builds up on the surface of the water and the Betta is prevented from reaching a clean surface spot, he will drown. He also uses his gills so he can remain underwater for a time, but if you watch your Betta he will go to the surface and "butt" the surface with the top of his head, this is his "breathing air". A lot of owners provide a tall plant for their Betta to sleep in at night so they won't have to swim so far to "breathe".

BETTA FOOD
There are many special foods for Bettas and thanks for all of them because you see, the Betta is probably one of the most picky eaters there has ever been. I am sure someone somewhere has more than likely taken out bankruptcy trying to find a food that their Betta would eat. LOL There are really only 3 types that are generally successful. The pellets (be careful of size - even some of those advertized as Betta pellets are too big for their mouths); Bloodworms - (handle with care some people are allergic to them, but most Bettas seem to love them - I recommend only the Freeze Dried Variety as the frozen can bring in disease); and Freeze Dried Baby Brine Shrimp (they either love them or hate them - I would try the first couple first - these can be pricey). Some people have luck with feeding their Bettas flake food, but it is not a good idea on a steady basis as the Betta is a meat eater and his mouth is just not shaped for a flake.

BETTA CONSTIPATION
Maybe this should be considered with the FOOD topic, but it is such a MAJOR problem with the Betta, I am giving it a category of its own. The main cause is SPOILING YOUR BETTA. (overfeeding) Pellets: feed 3-4 pellets twice a day if you are feeding pellets Bloodworms: feed 6-7 worms twice a day if you are feeding worms (one or the other NOT both) Bettas will make you believe they have never had a bite of food ever before and they are going to starve unless you give them more. They do not know when to quit. Do Not follow the rule of "feed what they will eat in a few minutes". Your tank could not possibly hold enough. LOL They will make themselves sick and there are Bettas (many Bettas) who have died of constipation. If they do become constipated, and it is caught before they have totally impacted themselves, it is easily fixed with a bag of frozen peas and a microwave oven or a small pan of water. Just defrost one frozen pea and remove the skin and cut a couple very small chunks of it (no more than what would be the size of half his eye) and feed it to him. Hopefully this will get him going again. Then be very careful to monitor his eating.