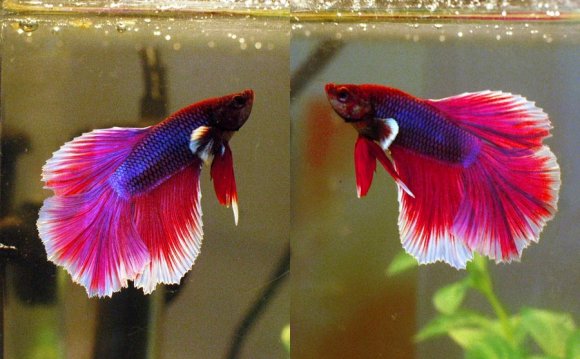 Accessorizing with fish was not what the people of Siam originally had in mind when they started collecting Bettas prior to the 1800s. Known as Siamese Fighting Fish, the Bettas of that time were not the same elegant, little fish we see today. With much smaller fins and a dirty greenish-brown hue, they were bred for competitive fighting and not for the fame of their magnificent finnage and colors. Native to Siam, (now Thailand), Indonesia, Malaysia, Vietnam and parts of China, these fish became accustomed to water temperatures that were often at or above 80 degrees.

For the children of Malaysia, in southern China, collecting these Siamese fighting fish was a favorite pastime. The children would catch as many as 50 Bettas an hour from the rice paddies, and then conduct fish fights to determine the village champion. Usually, the winner was the biggest fish they caught. Once the wounds healed on the prize-winning fish, he would go into competition again against a new opponent. This pastime diminished significantly when agricultural chemicals and mechanized plowing were introduced for the harvesting of the rice paddies. However, the fields were not the only place where one could find Bettas. They were also living in watery ditches, stagnant ponds and gentle flowing streams.

Known as plakat, which means tearing or biting fish, the wild Bettas generally would have short-lived fights of only a few minutes. Nevertheless, once the Siamese started to breed them specifically for fighting, these matches could go on for hours. The winner was determined, not by the wounds he inflicted, but instead by his willingness to continue fighting. The losing fish retreated and the match was over. Destruction to the families of the men betting on the fish was also substantial, with potential losses as great as his money, his house, and on occasion, his wife or other family members!

Observing the obvious popularity of these fights, the King of Siam started licensing and collecting these fighting fish. In 1840, he gave some of his prized fish to a man who, in turn, gave them to Dr. Theodor Cantor, a medical scientist from Bangor. Describing these fish in an article nine years later, Dr. Cantor gave them the name Macropodus Pugnax. In 1909, Mr. Tate Regan renamed them Betta Splendens, noting that there already was a betta species with the name Dr. Cantor used. It is believed that Mr. Regan got the name from a warrior-like tribe of people named "Bettah".

By the last quarter of the 1800's, the Betta Splendens were introduced into France and Germany and in 1910 they were first seen in the United States. With the variety of colors and fin combinations introduced, these fish were considered to be a different species, thus a long list of alternate names was created.