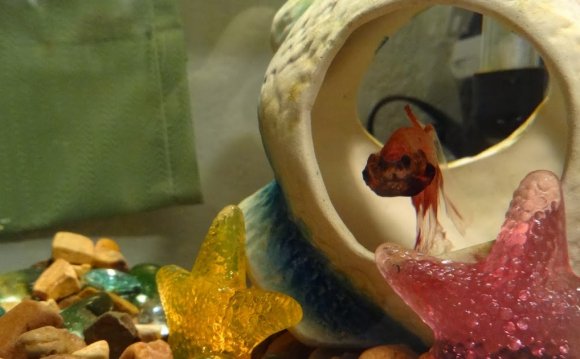 One of the earliest symptoms is ragged fins. As the disease progresses, the fins become increasingly shorter and some whiteness appears on the edges. Cotton Wool, a secondary disease, may develop, and will manifest as a fuzzy growth on the fins. If untreated, the base of the fins will become red and inflamed, with spotty, bloody patches.

Fin Rot occurs when the Betta is distressed due to poor water conditions, overfeeding, uneaten food, overcrowding or rough handling. If the water is not changed regularly, the leftover food particles and feces will decompose and contaminate the water. If there are too many Bettas or too much food in the tank, even regular water changes may not prevent the disease. The resultant stress on the Betta lowers his immunity, thus making him very susceptible to attack from the bacteria present in the water. Only in rare instances will Bettas develop Fin Rot when a tank is impeccably maintained.

Once Fin Rot sets in, change the water and examine the conditions within the aquarium. Remove everything from the aquarium and wash all the decorations and rocks with hot water. Do not use soap. Follow instructions for changing the water in the aquarium.

Since Fin Rot is a bacterial infection, medication is available to cure it. Some medications successfully used to cure fin rot include Jungle Fungus Eliminator and Tetracycline.

Fin Rot is very contagious. Separate the fish that appear uncontaminated from the diseased fish. Place the uncontaminated Betta in a separate quarantine tank until you are sure they are healthy. To prevent the disease from being transferred to your healthy Betta, do not share nets between the tanks. Also, ensure that you wash everything used in handling either the sick or the quarantined Betta properly in hot water before using it with any other fish.

The best way to treat Fin Rot is to prevent it from occurring. Here are some helpful tips:

Change the water in the tank every one to two weeks and thoroughly clean all decorations, rocks, etc. without using soap. Instead, purchase a cleaner formulated specifically for this purpose from your local pet store or fish dealer.

Check that your betta's food is correct for his specific diet and be extra careful not to overfeed your Betta. It is far better to give your fish smaller quantities of high quality food. Overfeeding will allow excess leftover food to remain in the water, which in turn will increase the concentration of bacteria in your tank.

Be gentle and cautious when handling your Betta. They are easily stressed if they are carelessly handled.

Is it Fin Rot? Or Fin Loss?

Many people confuse fin rot with fin loss, and the two conditions are significantly different.

As we’ve established, fin rot is a treatable bacterial infection that is often caused by poor water conditions that can leave your betta susceptible to fin rot. Usually, fin rot is identifiable because the edges of your betta’s fins become blackened or bloody, or there is a rapid loss of fin tissue.