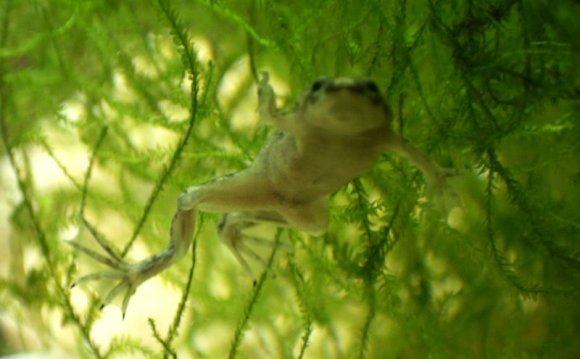 So, with so many people asking about them all the time, i figured it was time to put the best knowledge i have on one easy to find page! :) This is info that i have pulled directly off of the best websites i know, and some from my own experience of raising them for many years. *ADFs are 100% aquatic & should never be out of water. They are most active in the evenings, resting throughout the day. ADFs grow to about 1.5" snout to vent (nose to butt) length & can be identified by the webbing between the toes on the front flippers. Females will often be larger than males. Males will show a white spot on their sides under their front arms when mature and may start hugging (amplecting) other frogs. Male is smaller, develops a small red or white spot behind his armpits when sexually mature. When viewed from above they have a V shape ridge across the back from the anus across the rear legs (see picture below). The males also have a tiny to no visible 'tail' bud. The females are far rounder in appearance and have a small tail bud. The males also sing, while the females only sing rarely and usually as a response to the male.
*Use at least 3 gallons water per frog & nothing smaller frogs do need room to swim & dont get lonely in a bowl/tank on their own but the interaction between 2 or more is delightfully more entertaining for you. The ADF, like all frogs, have to discard their outer layer of skin every few weeks as they grow. They accomplish this by twisting and turning violently, and often go on to eat the skin. Young and juvenile ADFs tend to be more active near the water line and prefer floating plants to lie upon. The ADF is very long sighted and as adults have eyes on opposing far sides of the skull. This means it has great difficulty in seeing anything close to it or directly in front of it, so it relies on its sense of smell and vibration to find its food. It can often be seen stabbing at food on the bottom, missing quite a few times! It can take a ADF ten minutes to discover that there is food in the tank. So if a ADF is kept with fish, you have to allow for this by feeding the fish first in one place and then feeding the frog in another place. It can be all too easy for a inexperienced owner to starve their frogs if kept with bottom feeding fish. Peaceful animals which are known for their 'comical' behaviour.

*ADFs are great escape artists, so youll need a lid on your bowl/tank. ADFs breathe air from the waters surface, so be sure to leave space for air between the lid & waters surface. This is a fully aquatic frog and will stay underwater for hours; however, it still needs to periodically come up to the surface to breathe. The substrate must be too large or (preferably) too fine to be eaten by the frog while lunging for its food. If gravel is eaten by the frog, it will remain in the intestinal tract, cause blockage, and shortly afterwards, death. Sand or river rocks of at least 0.5cm (0.2") in diameter is recommended. The minimum tank size for one adult frog (over a year old) is 18.9 Litres (5 US G.). A young frog can probably get away with 11.4 Litres (3 US G.). Biological filtration perhaps isn't needed if the owner keeps up with regular weekly water changes. But it helps keep the levels of ammonia down if the owner neglects, overstocks or overfeeds. If it happens to be a power filter with a intake pipe, cover it with fine mesh to prevent the trapping of the frogs' delicate legs causing it to drown. This is a common occurrence in larger tanks. These frogs cannot be out of water for more than 10-15 minutes. If they somehow escape into the relatively desolate environment of an average home, their skin will dehydrate, and they will die. These frogs can be easily kept in aquariums with a tall water column. A -43cm (18-24") tall tank is not a problem for them. The water level must be dropped 2.5-5.1cm (1-2") from the top for two reasons; one, to allow for proper gas exchange and respiration of the frogs, and two, to prevent escape and therefore death. Otherwise ensure there are no escape holes for the frogs to explore. A ADF can easily jump 7.6-10.2cm (3-4") into the air from a solid base.

*Change 100% of the water once a week with conditioned same-temperatured water if you have one frog in a 2-gallon tank or less. Tanks that are 5-gallons or more should be "cycled" and have on average, 25% of the water changed once per week.
*Keep the water temperature ideally between 75-80*F, though down to 70*F & up to 82*F may be ok as long as your frog remains healthy. Dont set them in direct sunlight or on anything that heats up (e.g. PC/TV). Use a stick-on-the-outside (liquid crystal) thermometer to monitor the waters temperature.
*Adding a small live plant (such as Java Fern) will help your water conditions & give your frog a place to rest on or hide in or you can add an aquarium-safe silk plant. Large stones/gravel that are too large to be swallowed may be used on the bottom.
*Feed a varied diet, but no freeze-dried or dry pelleted foods, which can cause intestinal blockage & death. Frozen (but thawed) bloodworms, brine shrimp on occasion, or Frog & Tadpole Bites are a good variety. ADF's are meat eaters & they wont eat flakes. A frog's tummy will bulge slightly when fed enough. Overfeeding can lead to health problems. It will not harm an ADF to go for a day or two on occasion without being fed but do ensure your frog is eating if kept in a community tank with other fish who might eat all the food before the frog has a chance to hunt for it. Their close-up vision is very poor, so they hunt the bottom of the tank for hours in search of their food.
*Tankmates should not be aggressive, bottom feeders or African Clawed Frogs. If your frog would fit in the mouth of any other fish in the tank, then they are not suitable tankmates, as your frog will be eaten. Be sure your tank has at least 1 gallon of water for each inch of adult sized fish you keep. They often like to float lazily on the surface of the water so most tankmates should be those that prefer the mid-ranges of a tank. Will not bother any fish as long as it's bigger than itself. It will eat fish fry. It has been reported that ADF are compatible with larger shrimp such as Amano shrimp. They are not compatible with crayfish. Some people keep ADFs with Bettas. This is difficult as Bettas are also carnivores, so they compete for the same types of food. Often the Betta gets fat whilst the frog starves. Best to find a way to feed the frog without the Betta being able to eat it all. A word of warning, when ADFs are kept with Bettas there are stories of either the ADF having his eyes and toes nipped and even legs broken by a feisty Betta, and on the other hand, there are stories of ADF's grabbing a Betta's tail and hanging on causing stress and injury to the fish.
******* In America and Canada most large chain shops are selling these frogs infected with Chytrid Fungus, a highly infectious and deadly fungus which kills within the first 3 months of ownership. This is believed to be due to the shops mixing the African Clawed Frog (which is a immune carrier) in with the dwarf frog and so passes on the fungus via the water. It is recommended that owners in these countries quarantine their new frogs for no less than 3 months before placement in their main tank.