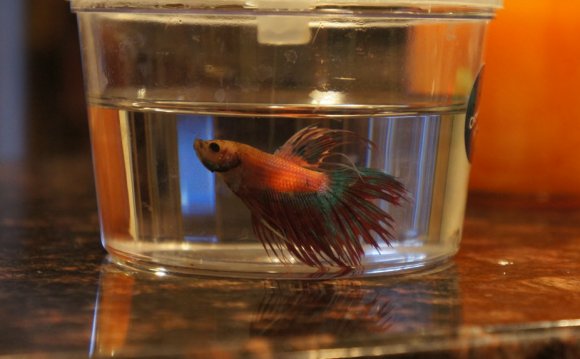 Bettas are weird when it comes to food because on one hand they will eat just about anything (especially things they are not “supposed” to) and on the other, they can be realllllllllly picky. So here is a recap of what bettas will or will not swallow :)), starting with their favorite gourmet food at the top and going down hill from there (down to the “I’m gonna puke” food).

Bettas are funny, because when you feed them something they don’t like, they have that look (yeah, you know, THAT one) on their faces, kinda like saying:

“You expect me to eat “that” ?”. They can be real snobs. However, if you give them something they love then it is the “SLURP GROM GLOUPS SLURP CRONCH CRONCH” they just gobble everything up with such enthusiasm and will continue doing so until they turn into little ballons. I often tenderly refer to them as my “little finned piglets” :)).

How often to feed. I recommend feeding your adult bettas once a day and your fries twice a day. If you really have nothing better to do, then you could also feed your adults twice a day, but cut the quantity of feed in half. You don’t want obese bettas, now, do you? :)) How much to feed. People think they have to feed their bettas until they explode, and that bettas will get big and strong that way. More than likely what will happen is that the bettas will not eat all the food, the uneaten food will rot in the jars/tanks, polluting the water and bacteria will promptly flourish in such an environment.

In turns, the bacteria will attack the bettas, which will become sick. So rule number one in betta feeding is DON’T OVERFEED!!! Feed as much as your betta can eat in 2 mn, and no more. Try to achieve a softly rounded belly. Your betta should not look pregnant :P. On the other hand, If your betta’s belly looks “hollow” or too flat, then you are either not feeding him enough, or he has a bacterial infection causing him to waste away (or internal parasites).

To illustrate this "softly rounded belly" concept, I have picked the following four photos. Please look at the area right were the ventrals start (inside the red circle):

This betta has the perfect softly rounded belly shape

This betta is borderline too rounded

This female ate too much.

This one is out of control LOL

Overfeeding can cause serious problem. Double Tail bettas will have swimbladder problem if you over feed them. They will start floating and may take up to several weeks to recover! So with DTs, it is even more important to not overdo it when it comes to food. Also when feeding live food, especially live brine shrimp, you must be aware that bettas will not stop eating until all the live food has been gobbled up. Twice I lost bettas that way. I kid you not. You will find them dead the next day. So only feed reasonable amounts of live food to your bettas, because in your fishroom, you are the only one with any ability to refrain things from getting out of hands. Your bettas can't and won't. They'll eat themselves to death. Literally. Wise buffalo has spoken.

Skip a day. It is a good idea to not feed your betta one day a week. Let his digestive system rest, let him clean himself out a bit. This does not mean that you should feed your betta whenever you remember, and that it is OK to feed him on and off and skip several days. You should feed him daily, and then skip one day every week.