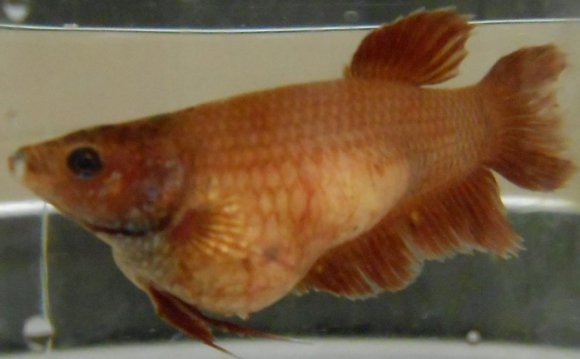 Betta fish are popular pets and are known for their distinct coloration and elaborate displays. Originally from Asia, wild Betta fish live in slow moving rivers and shallow rice paddies. They are often aggressive and males must be kept alone as they will fight to the death in proximity with other Betta males. Mating is the only occasion in which two Betta fish can be kept in the same tank—and only temporarily. After extracting eggs from the female, the two must again be separated as males may become violent. Bettas do not give live birth.

The female produces eggs which are then extracted and cared for by the male in a bubble nest of his making.

Notice the female Betta’s stripe pattern. If she has prominent vertical stripes, usually white in color, she is fertile and producing eggs.

Look for a white tube or dot on her belly. This is her ovipositor (where the eggs will be released), and if it is visible, she is preparing to release eggs.

Notice the male Betta’s tank. Has he built a bubble nest? If so, he is ready to mate and the female can be placed in the tank with him. The more bubbles, the better.

Watch the pair. If the bubble nest is to the female’s liking, the male Betta will then circle around the female and squeeze the eggs out from her ovipositor. If not, she will destroy the nest and he will have to rebuild.

After mating, look for tiny flecks in the bubble nest. These are the Betta’s eggs. If the flecks begin to grow over time, baby Bettas are on their way.