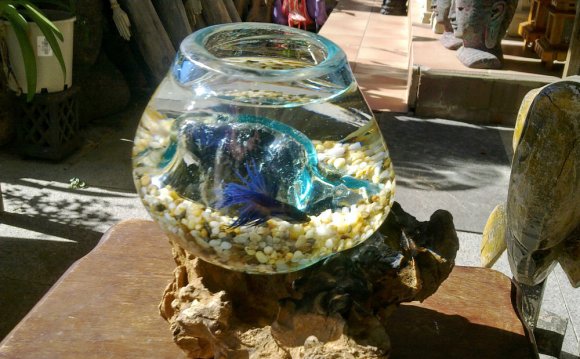 Designer and artist Adam Ben-Dror has already taught his Siamese Fighting Fish, José, to jump out of the water to get food and the fish has also been trained to follow his hand as he circles it around the tank. Recognizing that José is more than a mindless creature with a 3-second memory, Ben-Dror decided his fish should have more freedom to swim than the confines of its 1.5-foot-wide bowl. Therefore, he created the Abovemarine: a mobile fish tank controlled by José's own movements.

The Abovemarine is equipped with Omni wheels, a camera, Arduinio, and Processing, so as the fish swims, the bowl moves accordingly. As José swims backwards, the Abovemarine slows to a halt to avoid crashes. Without the Omni wheels, "The tank would get stuck in a feedback loop, spinning in a circle every time José, who moves relative to the tank, swam left or right."

Ben-Dror explained the project's conceptual goals in an email:

"The Abovemarine is not fish freedom. It is not a product and it is not for fish to live in (and they don't). José and the Abovemarine engage our interest in the beauty and intelligence of these creatures. We are encouraged to ask questions that challenge our preconceived notions about fish and other living creatures. 'Does the fish have intention? Does the fish understand what he is doing? Do fish have memories?'"