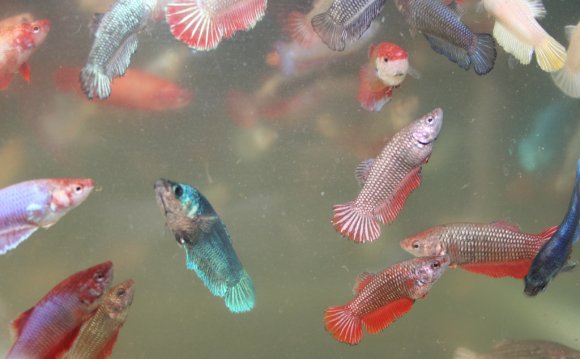 As previous posters mentioned, betta fish absolutely do grow. They continue to grow, mature, and change well into old age just like humans and other animals do. That is if they are provided with the proper care and environment. Additionally, it depends on the age you purchase the betta fish. If you buy one from a chain pet store then they are likely 3 months and possibly upwards to 6 months, but rarely that. Some chains, like Petco, sell baby betta fry. They are extremely delicate and need more specialized care, but with those needs met, one can watch their baby grow into the beautiful adult they are meant to be.

Still, you won't be able to truly know their age unless it is purchased from a reputable breeder. Breeders keep track of birthdates and such information and can give you precise numbers generally.

I'd also like to note that the size and length of fins are dependent on the type of pet betta. Double tailed bettas have shorter bodies due to the spinal deformity that causes the tail to split. A typical betta will grow 1 - 3 inches long, whereas King and Giant bettas average 5 - 7 inches (I won't discuss technicalities between Kings and Giants, though). Males are generally larger than females, but there are exceptions and anomalies to everything. I've owned a runt halfmoon male who was significantly smaller than one of my female halfmoon - half her size if the tail is discounted.

Essentially, their size, physical traits, and weight are extremely dependent upon their genetics and the parent bettas. You might find scrawny crowntails or beefy ones. Same applies to half-moons and other tail variants.

Lastly, again with proper care and the right environment, your betta's body will eventually stop growing and have reached sexual maturity, but their tails continue to grow up until death, tough gradually. This is akin to how a human's ears do.

I attached a chart below displaying the growth of a betta fish. Petco's baby bettas previously mentioned are typically around the five to seven week mark, but you might find some as early as three to four weeks old sold as well.