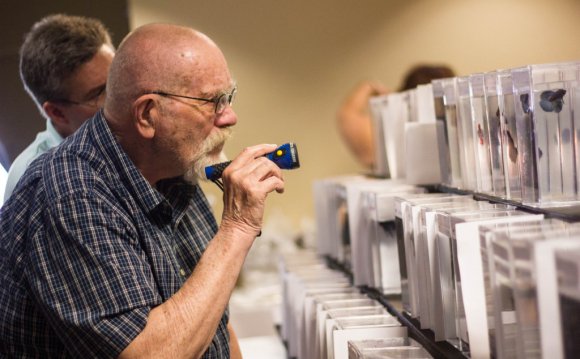 The Betta originally came from mud puddles in southeast Asia. It is also known as the Siamese Fighting Fish, because males are totally intolerant of each other and will fight violently. Their distinctive feature is the long broad fins on the males. Females have very short fins. Bettas come in a variety colors and are very slow swimmers most of the time. They have a labyrinth which allows them to breathe air directly. You will find them continually at the surface of the water.

Bettas are often sold in small bowls or cups, because they don't need oxygen from the water like most other fish. They will eat flake foods, but they will benefit from betta pellets. Although Bettas are often kept at room temperature in small bowls, they will do better in a heated aquarium. Frequent water changes are necessary if they are kept in a small container.

Bettas are egg laying bubblenest breeders. The male blows bubbles which stick together and accumulate at the surface. A female can then be introduced. The male aggressively courts the female and spawns by wrapping and intertwining with her.

The female releases eggs which are fertilized by the male and float up into the bubblenest. The male cares for the eggs during the two days it takes them to hatch. He will take them into his mouth to clean them. After a couple of days the bubblenest dissolves as the fry emerge. Breeding Bettas is not difficult but ensuring the fry survive is more challenging. For detailed information on breeding Bettas, visit Aquarticles.

Comments on Feeding Bettas by LittleHippyGirl:

If you are worried about feeding a dry diet, you can try soaking and squeezing pellets so when you feed them, they have already expanded and there is no air left. They also sell a food called HBH supersoft pellets, but they are pretty big. I give break them into peices before feeding them to my bettas.

Freeze dried bloodworms will not sink no matter how long you soak them. They are good as an occasional treat, but don't feed too much or too often. Bettas LOVE mosquito larvae, so if you set up a bucket outside and moniter it, you can give them disease free live food without spending money.

Sterilized frozed food (except tubifex) is usually better on their stomachs, but if you aren't comfortable with it, feeding dry foods is fine. I've always fed them that and I've never had a problem as long as I don't feed too much. Betta's stomachs are about the size of their eye so they are easy to overfeed. Occasional fasting or supplementing their diet with boiled shelled peas helps keep their system clean.

Comments on Feeding Bettas by kb46:

My bettas seem to live an air alone. I feed them once per day and rotate between flakes, tetramin, micro-pellets, hikari biogold pellets and frozen bloodworms. One eats flakes sometimes, the other eats micro-pellets sometimes. Most days I recover all of what I given them, except if it's bloodworms - both of them would gorge themselves if I let them.

Comments on Leaving Male Bettas with Fry by Neoblaze550:

In order to make this spawn successful I suggest you have some experience in breeding bettas and taking care of betta fry ( this is not for beginners or people interested in having large spawns) first I introduced the male in his aquarium that is filled with alot of floating plants (water lettuce and water sprite) I also included a bundle of anacrus held down by a sinker and a small cave that the female betta and the fry can use when they are older. after the male was used to his surroundings I picked out one of my female bettas that looked extra plump and placed her inside a floating see through cup in the breeding tank. When the male saw the female he started to build a huge bubble nest under the floating water lettuce. I left the female in the cup for a couple of days until I noticed that she was ready to spawn, I waited about 4-5 hrs and the nest was already full or eggs (if you don't see eggs right away don't panic it can sometimes take 2 days) I took out the female and waited. Surprisingly the eggs started hatching later that night and the dad was already showing good parental skills by not eating them and and he was retrieving the small fee falling fry and returning them to the nest ( If you notice him eating some don't worry he is just culling the weak ones). It's been about 5 weeks and the male has culled mast of his spawn but he has spared about 6 that are bigger than the fry that I breed the regular way. People say fry raised this way seem to be less aggressive, they grow faster, and they become better parents when they grow up.

So if you feel lucky I would definitely recommend this method.

The Thai Way (information submitted by a Thailand breeder)

In Thailand most breeders use some kind of plastic or pottery bowls. The small bowls or the tanks do not even have to be very clean. They use anything that they can fill water into. And the warm climate and all the live food like: mosquito larvae and insects makes it to the ideal place to raise bettas (this goes for many other countries in the region).

When the Thai breeders going to breed they go for health and vitality. The first they look for is if any male has started to build an bubblenest in the jar, and if their is any bubblenest, they go after an female how has bright colors. Then they start to feed the pair for 1-2 weeks with rich, high quality foods, so that they are in their best health when the breeding starts. The male can be in the breeding tank up to 5-6 days without food.

The fry usually gets egg yolk as their first food, the breeders feed the fry with the yolk up to 7 days, twice a day. The fry grow very fast on the egg yolk when it is rich on protein, and even the smallest fry can get the yolk in their mouth. They feed the fry with baby brine shrimps and infusoria.

After 1 week, some breeders move the fry to outdoor ponds such as concrete tanks. Some breeders stop to feeding the fry and leave them to find their own food such us mosquito larvae. The weakest soon die.

Can you keep female bettas together by LittleHippyGirl: o put it simply, yes. It is complicated though.

Compatibility with bettas, both male and female, is a hard thing to describe because their personalities vary wildly. Sometimes a female is so aggressive that it can not be kept with anything else. That's not usually the case, but it happens more than some people think. If you want a group of girls to work out, there are a few things to...