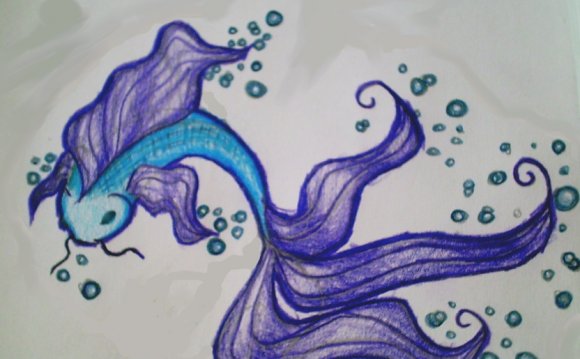 Step 1)
All this line does is make the top of the betta's head. Its just a very gradual uphill stroke. I make my line going from right to left with my pencil, but you should practice and see which direction is best for you. Step 2)
This creates the shape of the gill cover. Step 3)
Bettas have very distinctive lips, which gives them a pouty look. All you need to create their lips for this drawing, though, is just one little extra line that cruves out just a bit beyond the lines oyu made for their head and gill cover. Step 4)
The eye can be just a large black dot. Bettas have pretty big eyes. If you want to add more detail, leave a little white spot near the upper middle part of the eye to create the effect of a highlight. Step 5)
A fan shape is all you need to create the pectoral fin. Step 6)
A little streamer down makes the long skinny pelvic fins. Add a second one behind it if you want - you'd probably be able to see both pelvic fins from this angle. Notice that the pelvic fins are between the gill cover and the pectoral fins, right about in the middle of that space. Step 7)
The dorsal fin is large here, but hopefully your betta has a large, healthy dorsal fin. Note that this dorsal fin is pushed back on the betta's back. To place the dorsal fin in the right place, measure the distance from the tip of your betta's lip to the far edge of its gill cover. The dorsal fin should be that same distance down the back from the far edge of the gill cover. Step 8)
And now you add the long, glorious caudal fin. Depending on what kind of betta you want to be drawing (a half moon betta, for instance), you can adjust the shape of the caudal fin. Step 9)
Next I added the anal fin. I also added optional gill flares. This is an easy way to make your betta look like its in fighting or display mode, and all you have to do is make dark little extra fin-looking things behind the gill covers. Step 10)
The final betta. I added one last line between the anal fin and the body to make the betta's body shape more distinctive. Now all this fish needs is some color!
Source: www.howtodrawit.com