Can you put Bettas with other fish? 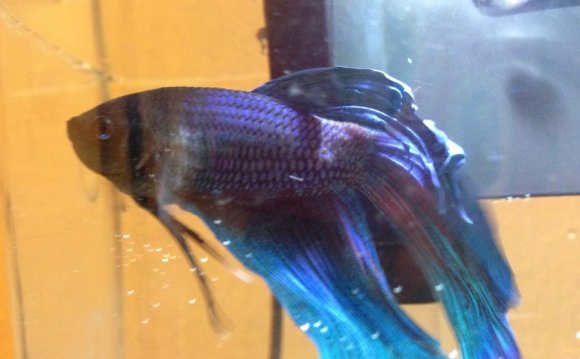 Housing a cichlid with a betta would be very interesting, but ultimately destructive. The betta fish is known as a fighting fish - in Thailand fighting bettas is a sport - and a cichlid is equally aggressive. Both are even known to fight and kill their own species.

About Cichlids and Betta Fish

Cichlids are known to be aggressive towards other cichlids and fish with a similar morphology. They see the fish closely related to them as a threat, particularly in terms of dietary requirements. The betta fish is called a fighting fish for good reason: the males can fight each other to death over territory. In Thailand it a serious and popular sport to fight the short-finned plakat species. They breed each one specifically to become a champion and will place bets on the winner during a bout.

What Happens If You Put a Betta In With a Cichlid?

When you house a betta fish with a cichlid, the betta's famous long, flowing fins can become a problem. An aggressive cichlid can harass your betta and nip and tear his fin. This will result in two problems for your betta. First, the torn or distressed fins will hinder his ability to swim properly. Second, his ripped fins can lead to diseases such as fin rot, bacterial infections and ich, and ultimately his death.

Tankmates for a Betta FIsh

You should select peaceful, community fish as tankmates for your betta fish, such as an apple snail or a neon tetra. Equally important, however, are the bettas that you house together. Never house male bettas together. They are very territorial and will fight each other to the death. Do not house male and female bettas in the same tank unless you are an experienced breeder. You can house female bettas together in groups of three or more, as this allows them to establish a hierarchy. If one is overly aggressive or dominant, however, remove her from the tank. If you only want to keep one betta fish in your tank, either male or female, consider the following fish as tankmates: black skirt tetras, neon or cardinal tetras, swordtails, mollies, hatchetfish, corydoras catfish, white clouds, silver dollars and guppies.

Tankmates for a Cichlid

There is one major problem when selecting a tankmate for a cichlid: there are thousands of different species. The fish that you house with a cichlid will have to be compatible with that particular species' diet, water requirements and personality. If your species of cichlid is known to be aggressive, avoid putting in fishes of the same genus and/or color.