Fish you can put with a Betta 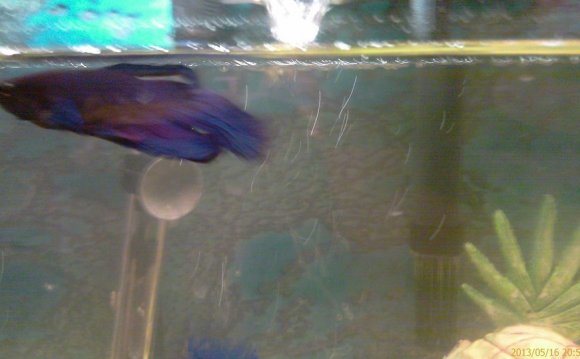 Is it a male or female betta? Males typically don't do well with tankmates.

Then he really shouldn't have a tankmate. Bettas are known as fighting fish for a reason.

All bettas are different and some don't mine other fish as long as they are not brightly colored or long finned.

The problem however, is that you only have a 5 gallon tank. Your tank is stocked with just the betta, although you could try a snail. If your betta acts aggressively toward the snail you will have to separate them.

If you wanted to try any other kinds of fish with your betta, you would need at least a 10 gallon tank, and also be prepared to separate them if you noticed any aggression.

you should probably lay off any fish, if you want tank mates for betas in such a tank you could keep snails and shrimp, i reccomend snails because their hard shell protects them from the betta and i say ghost shrimp are good so the betta cant see them because of whit coloration. fun fact: did you know bettas actually have poor eyesight but have great tactical sences and an excellent source of memory, making them some of the smartest aquarium fish in the world!

i actually had a plakat male betta with a hi fin platy and they were fine, sometimes they would even swim side by side, when it comes to bettas its all about personality

I didnt know that about bettas, gourami. Thanks for sharing!

Ghost shrimp are a good idea, Ive actually been considering them for my betta tank. A snail is also a good idea, but if your betta is aggressive towards it, the shell wont protect it from everything. The betta can hurt or tear off its eye stalks. Then your snail will spend most of its time cowering in its shell.

thanks, and your right about the snails, its a 50\50 chance, both my vieltail beta and dwarf gourami share a snail or two in both there tanks and rarely notice them

your right about plakats, i had one named alpha and he was my favorite, he used to be in a 1 gallon bowl before going to my community tank, i would put on the lights on his bowl at night and he would go berserk, he would fatten up and open his gills so big you could think he could pull out a knife from them

Thanks it feels nice to be welcomed

I agree, don't add fish to a five gallon with your Betta, just let him be king of his castle!