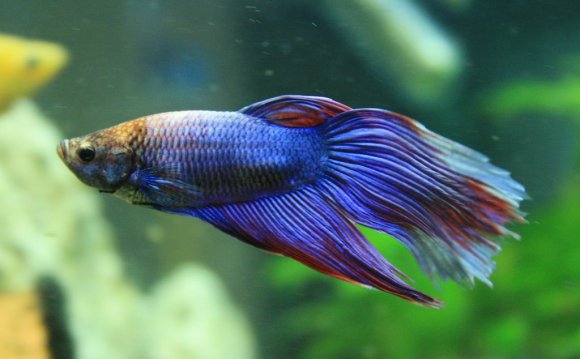 The beautiful, vibrantly colored betta is one of the most distinctive and visually impressive freshwater aquarium fish, and one that many fish keepers and hobbyists aspire to own.

As well as being visually appealing, bettas are interesting to keep, relatively easy to keep healthy, and providing that you do your research before buying, a perfectly good fish for the first-time keeper.

Read on for 5 interesting facts about the betta fish!

1. The Siamese fighting fish is not the only betta

2. The betta originates from Thailand

As the “Siamese” part of the name suggests, the Siamese fighting fish and other bettas originate from Thailand, previously called Siam. In their natural environment, bettas live in the shallow, marshy fields of rice paddies. For this reason, they thrive in a shallow tank with a large surface area.

When people in Thailand realized that two male bettas together would put on impressive threat displays and fight each other, they would often actively select and keep fish with significant fighting prowess, and use them to fight other fish in competitions. This “hobby” died out towards the end of the 1800s.

In captivity, the betta prefers to be fed food such as brine shrimp and blood worms, but they will also eat specially prepared pellets and flake food designed to meet their needs. You can even buy pre-prepared food mixes specific to bettas, which provide for all of their needs and help to enhance their bright, vibrant colors.

Unlike the vast majority of small fish, the betta species has an organ within their heads known as the labyrinth organ, which allows them to breathe oxygen from the air rather than solely from the water.

This evolutionary advantage helped the betta to survive in conditions that are hostile to most other fish, such as very shallow rice paddies and slow moving streams. However, your betta does of course need to live within the water, and should never be removed from the tank!