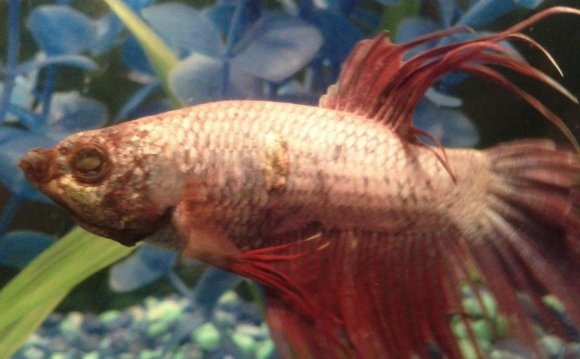 The cause is internal pressure.The pressure can be from many different things. The most common is infection.

Beta Fish Care and Treatment: "Maracyn 2" by Mardel is recommended. Maracyn-2 is a broad-spectrum antibiotic (minocycline) tablet used for popeye, fin and tail rot, gill disease, dropsy, septicemia, secondary and internal infections. Order Maracyn 2 here . It is important that the treatment be absorbed inside the beta fish to treat the infection. Frequent water changes twice a week, as well as higher temperatures may also help the beta fight off the infection himself.

diseases are often a result of cooler water temperatures. Medications containing Malachite green or Methylene blue are also effective. Malachite green is a completely safe and effective treatment in fresh and salt water on a wide range of protozoan, crustacean, and other invertebrate parasites of fishes. See our selection of Antifungals.
Adding common table salt (sodium chloride) to the water, one teaspoon per gallon can help reduce the recovery time.

Ich is a protozoan parasite found on most freshwater fish. It appears as small white dots or spots on the beta fishes fins and body, which may look like white grains of sugar.
Outbreaks most often occur when the water temperature drops below 80 degrees F.

Beta Fish Care and Treatment: Elevate the water temperature to the mid to upper eighties F. Salt baths are effective against Ich. Adding common table salt (sodium chloride) to the water can help reduce infection. Add one teaspoon per gallon as a preventative measure.
Medications containing Malachite green or Methylene blue, repeated at intervals of 2 days are also effective. See our Ich treatments .

Velvet/Oodinium is an algae parasite found on many freshwater fish.
This disease appears as a yellow "velvety" coating on the beta fish's body. It may alsoappear golden or rust colored. It is often found in fish which are stressed due to chilling, transportation, water changes or poor water quality. Symptoms include rapid, breathing and listlessness.

Beta Fish Care and Treatment: Elevated temperature and medications such as acriflavine, Methylene Blue or Jungle's " velvet guard" should help treat this parasite. Bowls or tanks should be drained and cleaned. Dyes should not be used since they contain mercury.
See our selection of Antiparasitics .

Fin Rot is bacterial based and often occurs in weaker beta fishes.

Beta Fish Care and Treatment: Use of antibiotics, anti-microbials, and preparations containing these. One such compilation is Mardel Maracyn 2. Maracyn-2 is a broad-spectrum antibiotic (minocycline) tablet used for popeye, fin and tail rot, gill disease, dropsy, septicemia, secondary and internal infections. You can order Maracyn 2 here .
Changing the water, raising the temperature and adding a bit of salt will often achieve good results.

Is caused most often by an internal, bacterial infection. It most often shows itself as bulging sides and protruding scales on the beta fish. Again, the most likely cause is poor water conditions.

Beta Fish Care and Treatment: The use of Mardel's Tetracycline is recommended. Tetracycline is a broad-spectrum antibiotic for treating fin and tail rot, popeye, gill disease and dropsy. it is primarily effective against gram-negative pathogenic organisms.
Tetracycline is available .

Shows as small, black patches on the body of the beta fish.It is often found in fish that are stressed due to transportation.

Salt Baths are used as preventative measure against Ich and Oodinium.
Copper Sulfate is effective as a disinfectant for equipment, tanks and bowls.
Seachem cupramine all the advantages of copper sulfate only cheaper.
Formalin is effective against Ich and parasites.
Malachite Green is commonly used to treat protozoan infections.

Beta fish are resilient but do not tolerate thermal swings very well. Betas are tropical fish and must be kept in tropical temperatures. Beta fish require regular, twice-weekly water changes in gallon water containers, a mix of foods (not simply dry pellets), and your interaction to stay healthy.

Most of the sicknesses or diseases with tropical freshwater fish can be attributed to their environment.

Almost always a quick water change, the addition of a bit of salt (unionized sea salt is the best, about a level teaspoon per five gallons equivalent) will solve whatever is ailing them.