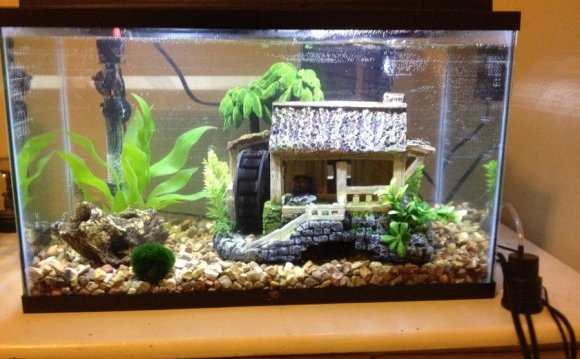 Photographer: Tony TerceiraWhile many are content with keeping their betta in a small unheated bowl, these beautiful fish look better and live healthier lives in proper setups.

“Excuse me, sir, ” a tiny voice called from behind me as I flailed about in another tank, fruitlessly chasing a specific Chinese algae eater with a net. Frustrated with the futile chase, I dropped the net into the aquarium and turned to face my questioner, a wide-eyed, blonde-haired boy, who couldn’t have been more than 10 years old. In one hand he held a tattered slip of paper, and in the other fist he clutched a crumpled five-dollar bill.

“Yes?” I replied, wiping the aquarium water from my arms on a nearby utility towel. “What can I do for you?” The boy glanced down at the sheet of paper in his hand and cleared his throat. He twisted the toe of his shoe into the tile floor as he spoke.

“My daddy wants me to buy a…a…” His brow furrowed as he read the paper. “A betta splendid.”

I smiled and reached for another dipnet.

“A betta splendid, eh?” I joked as I headed for the betta display at the other end of the store. “I think we’ve got a few of those. What color does your daddy want?” The boy followed close on my heels and, after surveying each of several 5-gallon tanks in which our bettas were individually housed, he pointed to the most splendid pastel blue betta in the house.

The fish that the young man purchased was a Betta splendens, more commonly known as simply the “betta” or “Siamese fighting fish.” Frequently kept by hobbyists in tiny bowls, glass vases, or other desktop aquaria, the betta has long been a subject of controversy. Adherents on one side of the war say that bettas don’t need excessive space to swim and move, and that they are perfectly at home in a softball-sized bowl. Members of the opposite faction contend that no self-respecting aquarist would imprison an animal within such a minuscule enclosure. As a former fish retailer and longtime hobbyist who’s answered the same betta questions from customers more times than I care to remember, I’ve reached the conclusion that both sides of the betta argument are right and both are wrong. So dive in, if you will, to the underwater world of the bettas, and let’s answer once and for all some of those prickly questions about our flamboyantly finned friends.

Understanding the biology and natural history of Betta splendens is paramount to really knowing your fish. Hailing from the warm, oxygen-poor waters of Thailand, Burma, and surrounding areas, bettas belong to a group of fish known as labyrinth fishes, whose name comes from a breathing-accessory organ known as a labyrinth. Functioning as a sort of rudimentary lung, this organ allows the fish to gulp air directly from the atmosphere; the fish need only break the surface with its mouth, swallow some air, and slip back under the water while the atmospheric air absorbs into its bloodstream. While not an overly efficient means of breathing, this method of augmented respiration is highly beneficial to bettas. In their natural environment of slow-moving, oxygen-poor waters, this adaptation allows them to live and thrive, despite such harsh conditions.

So a shallow tank of unmoving water is nothing new to a captive betta, and these fish have shown they can survive in a small bowl, but does this mean they can thrive in this type of environment?

Speaking to the technical side of the matter, we know that more room to move about isbetter. A higher volume of water allows for more stable water conditions and thwarts the waste concentrations that a polluted betta bowl is subject to—it can go from livable to toxic literally overnight. A larger tank also grants the fish more room to move and swim about.