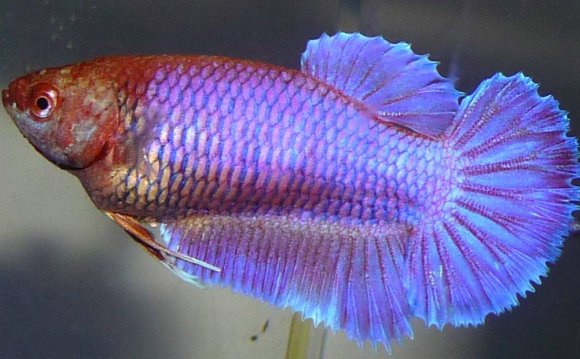 GloFish® fluorescent fish are born brilliant! They are not injected or dyed. They inherit their harmless, lifelong color from their parents, and require the same care as any other community fish. GloFish are great for any home, office, or classroom and perfect for hobbyists and beginners alike.

GloFish are similar to other fish, except they have a much brighter disposition. GloFish are available in six stunning colors: Starfire Red®, Electric Green®, Sunburst Orange®, Cosmic Blue®, Galactic Purple®, and Moonrise Pink®.

Today’s GloFish fluorescent fish are bred from the offspring of fluorescent fish that were originally developed several years ago. Each new GloFish inherits its unique color directly from its parents, maintains the color throughout its life, and passes the color along to its offspring.

Want to know more about GloFish? Click on a topic to learn more:

The Science of GloFish

Where do GloFish fluorescent fish come from? GloFish were originally bred more than ten years ago to help detect environmental pollutants. By adding a naturally derived fluorescence trait to the fish, scientists hoped to quickly and easily determine when a waterway is contaminated. The first step in developing a pollution-detecting fish was to create fish that would be fluorescent all the time. Scientists soon realized the public’s interest in sharing the benefits of this research, a process which led to GloFish fluorescent fish.

How common are fluorescent fish in nature? Fluorescent fish are very common in nature. In fact, a recent study conducted by the American Museum of Natural History found more than 180 species of fish that are naturally fluorescent under blue light. Fluorescent fish can be observed expressing vibrant green, red, and orange fluorescence patterns across a very diverse range of species, including more than 50 families. For more details, please click here.

How do GloFish compare to naturally occurring fluorescent fish? As noted above, fluorescent fish are very common in nature. They can be observed in vibrant green, red, and orange colors. As seen here, these colors are strikingly similar to the fluorescence colors expressed by our Electric Green®, Starfire Red®, and Sunburst Orange® GloFish.

What other types of organisms are naturally fluorescent? In addition to fish, fluorescence has been commonly observed in certain types of corals and other marine life, and fluorescence signaling has been reported in butterflies, parrots, spiders, and even flowers. It has been suggested that they function to assist with things such as visual contrast, antioxidation, photoacclimation, and health. Please click here for more details.

How exactly do GloFish help in the fight against pollution? To achieve their goal of helping to fight water pollution, scientists have developed a ‘switch’ that will cause always-fluorescing fish to selectively fluoresce in the presence of environmental toxins. A non-fluorescing fish will signal that the water is safe, while a fluorescing fish will signal trouble. To help further the research, a portion of the proceeds from sales of all GloFish goes directly to the lab where these fish were originally created.

Exactly how do the GloFish become fluorescent? Every variety of GloFish fluorescent fish (i.e., Starfire Red® Danio) began with a single fish. The general process of developing fluorescent fish, as illustrated in this chart (Development of Transgenic Fish), begins by adding a fluorescence gene to the fish before it hatches from its egg. The developing fish will then be able to pass the fluorescence trait along to its offspring upon maturity. From that point forward, all subsequent fluorescent fish are the result of traditional breeding.

GloFish and the Environment

How long have GloFish been available? GloFish fluorescent fish first became available in late 2003. They have been safely sold throughout the United States since that time.

How can buying GloFish help in the fight against pollution? GloFish have existed for over a decade and were originally developed to help fight pollution. By marketing these fish, we will allow people to enjoy their own fluorescent fish while promoting the beneficial scientific goals behind their development. In fact, a portion of the proceeds from sales goes directly to the lab where these fish were created in order to further their research—research we hope will help to protect the environment and save lives.

Which federal agencies have reviewed these fish? We have submitted detailed information regarding each line of GloFish fluorescent fish to the U.S. Food & Drug Administration, which has jurisdiction over biotech animals, as they consider the added gene to be an “animal drug.” Consistent with the findings of scientists worldwide, the FDA, working in coordination with the United States Department of Agriculture and United States Fish & Wildlife Service, found no evidence that our fluorescent fish pose any more threat to the environment than their non-fluorescent counterparts. (Read the FDA statement regarding our original line of GloFish.)