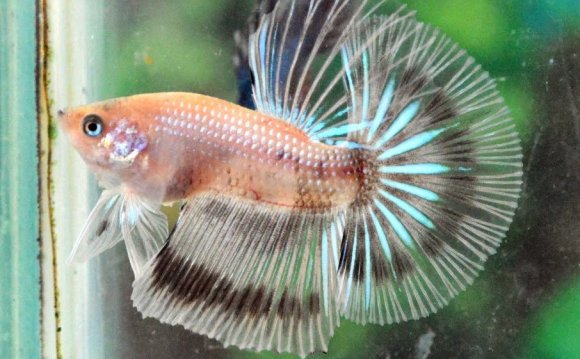 A:Black blotches he? Maybe it is time to pull out the scrubber and soap LOL. This is actually a good question because it really is a genetic question (for a change). I guess what I am saying is that if I answer one more sick betta question I will surrender my breakfast (and not in the prettiest of fashion, believe me!!)

So you got a "cellophane". Well, some of you are now going "Cello-whaaaat?". A cellophane betta is a betta with no color, so pretty much flesh colored with clear fins. All cellophanes, like all bettas, do carry one of the three iridescent colors: Green, royal blue or steel blue. Meaning that if you were to flash your flashlight on them you would see traces of one of the three above colors, usually on body and at the base of fins. Because cellophanes do not show any pigment, you can oftentimes see through their body (to some degree) and can decipher eggs, spines etc... But I must state right away that cellophane bettas DO NOT look like "glass fish" (where you can see EVERYTHING!). They are primarily flesh colored and NOT transparent.

Now that this has been said, let us talk about the genetic background of cellophanes briefly and this will automatically give you your answer. Cellophanes are actually marbles that are not showing their blotches. I must have said this over 200 times through this site's pages, marbles change colors throughout their lives. Say you breed two black marbles. You will get out of the pair:

As you can see your cellophane is a black marbled fish that started with no black pigment at all and is now starting to show some black blotches. Once again, marbles do change color (think: "Chameleon") over the course of time, some lose pigment, while some others gain it. So your fish might eventually end up with lots of black - or not - it is impossible to tell. Usually marbles tend to lose pigment more so than the opposite, and if they gain pigment it is not usually in LARGE quantities. So the chances of your cellophane actually turning into a solid black are slim to none, but he might however get more black blotches and turn into a "Dalmatian" (just a few spots) or a nice, more colored black marble. I guess what I am trying to say, in plain English, is that it is far more common for a dark colored marble to turn light then the opposite. When a light colored marbles turns darker, it is usually only to some (small) degree.

Hence I do not believe that your betta is sick. He is just marbling :). Oh, and note that there is not a hamster's behind you can do about it. (And put that scrubber and soap away, you're spooking the betta!) (and me, too) LOL.