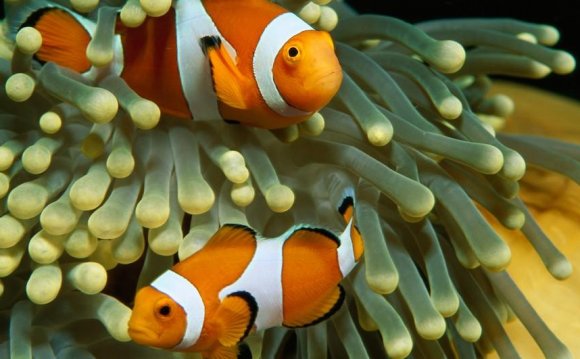 This lesson will introduce you to the prickly porcupine fish. You will learn about its home, its diet, and the special way it protects itself from predators.

They may look cute, but don't let that fool you. One wrong move and POOF! You're staring at a big, spiny ball that only the bravest sharks would dare eat. This prickly master of self-defense is the porcupine fish.

Porcupine fish grow up to three feet in length. They have large, rounded heads, and pale bodies that may be covered in brown or black spots. While most fish are covered in flat scales, porcupine fish have sharp spines. Their spines lay flat against their bodies until they sense danger. Then they fill up with water or air, growing to three times their normal size! When this happens, their spines stick out from their bodies making them difficult to eat.

Porcupine fish live in mild to warm oceans, including such diverse places as the Bahamas, Florida, Australia, and Africa. They tend to hide out in coral or rocky caves, but will sometimes swim around in the open. Young porcupine fish swim in the open ocean and seek shelter in seaweed.

Porcupine fish have a crunchy diet! They eat hard-shelled animals like crabs, snails and sea urchins, but will also eat sea jellies. They have large mouths and strong teeth to help them crunch through shells.

Porcupine fish have strong teeth that allow them to break through shells.

The Social Lives of Porcupine Fish

Porcupine fish are solitary animals, meaning that they usually live alone. They only come together to mate. Their eggs float along in the water, and receive no care from the adults. Once they hatch, baby porcupine fish are carried along by the currents until they are big enough to swim. Porcupine fish are on their own from the start!

Not many animals will dare eat an adult porcupine fish. If the spines aren't enough to scare them, the poison in their bodies will! Tiger sharks are one of the few animals that will try to eat a large porcupine fish. Other large fish, like swordfish, will eat younger ones.

All those spines make an inflated porcupine fish very difficult to eat!

People sometimes harvest porcupine fish to sell as souvenirs, or to serve as a meal. Porcupine fish meat is considered a delicacy, in part because it is poisonous! Chefs have to prepare the fish carefully, or the customer could get very sick.

Being so well-protected is good for porcupine fish. While many other species face extinction, there are plenty of porcupine fish in the world.

Porcupine fish live in mild to warm oceans all over the world. Their bodies are covered in spines, and they can swallow air or water to puff themselves up. Not many animals eat porcupine fish because of their spines and their poisonous skin, but people sometimes make them into a special (and dangerous!) meal.