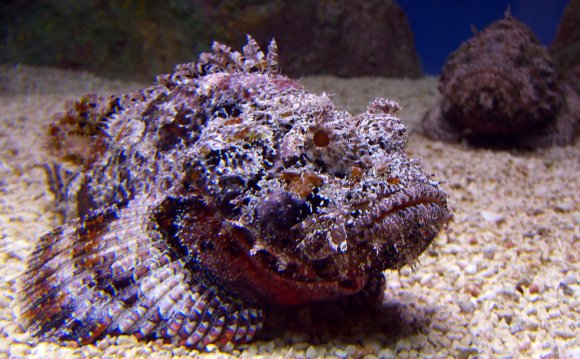 The next time you feel like a fish out of water, think of the Pacific leaping blenny. It spends its entire life out of water, expertly flopping around the rocks near the sea on the Pacific island of Guam, grazing on slime, showing off for the babes (and the guys), and it's plainly lovin' it. Just watch.

According to the authors of a new study on this fish that boldly went where few have gone before, the Pacific leaping blenny (Alticus arnoldorum) measures just a few inches long. What it lacks in size it makes up for in chutzpah, having made "one of the most extreme ecological transitions possible", i.e., bailing on that whole ocean thing. It's so 3 billion years ago.

Of course, they couldn't live without the ocean, because without the gentle kiss of sea spray found on the rocks near the waves, they would dry out, asphyxiate, and die. Since they ditched their watery home, they have also repurposed their skin (much as many amphibians have done) to serve as an external lung, absorbing oxygen directly from air. They still use their gills, but their dermal lung is a valuable supplement. But just as with our lungs, if they cannot keep their skin and gills moist, it's game over.

In spite of its need for moisturizing, the fish has essentially forsaken the sea and spends its entire life on land. Most of that life is a humble one, spent scraping the algae - delicious slime! - from rocks and eating it. But every once in a while, life gets more exciting for a time as both males and females hoist a flashy red dorsal fin as a prelude to sweet, sweet love, or perhaps if they'd just like to have some words with their neighbors.

Moving onto land also meant developing some new dance moves in order to get around, including a "unique axial tail twisting behavior". It goes a little something like this:

Obviously, leaving the ocean for land also leads to some big shifts in he kinds of things that might consider you ideal hors d'oevre material. Good news: you are now safe from big fish with nasty sharp pointy teeth. Bad news: Welcome to lizard, crab and gull hell. Scientists recently sought to find out whether the fish's camouflage - which as you saw in the video is a great match for the rocks on which it lives - is instrumental to its ability to avoid predators. They planted plasticine models of blennies on rocks and sand around the island. Judging by the number of rather soberingly described "missing body parts" and "puncture wounds" endured by fake blennies on the sand versus the rocks, the fish's duds are serving them well on their stony homes.

The scientists also looked at whether these little fish came by their camo before or after their bold conquest of land. It looks like many of their close, and still solidly ocean-based relatives bear this coloring too, as many of them live among rocks with unsurprisingly similar colors on the other side of the waves. They conclude that making radical substrate transitions is made considerably easier if you already match the new habitat, because, well, it's the same habitat, just less wet.

Is there an end-of-the-year lesson we can draw from the Pacific leaping blenny? When life gives you lemons, make lemonade? Don't be afraid to think outside the box? Buy the sensible car, but go ahead and add racing stripes? Perhaps the best of all is this: leap where you are planted. Just try not to attract too many gulls in the process.

The views expressed are those of the author(s) and are not necessarily those of Scientific American.