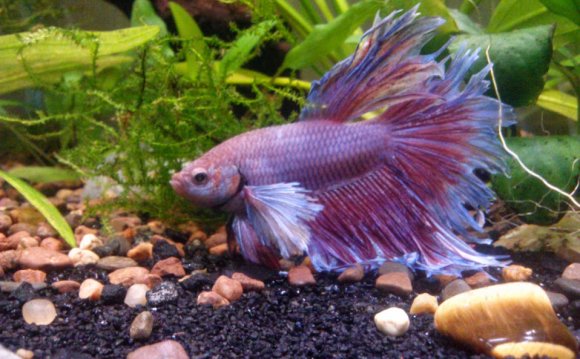 In order for your fry (baby fish) to eat, you need to feed them food that's small enough to fit in their mouth's. A microworm culture is great. Some vinegar eels are good too. Maybe some small baby brine shrimp, too, but they're a bit more labor intensive. Get your cultures all nice and big and split them in half. Then grow them up again before you start breeding. The good thing about vinegar eels is that they easily multiply, live for about ten months, and are easy to care for. To feed vinegar eels to the babies, you would need an eye dropper.

Now that you have food for the fry you can think about making them exist. Give the tank about six inches of treated, dechlorinated, lightly salted (aquarium salt) water, a heater and a filter that does not create a real big current. Don't forget all the plants. Let it sit for a few days, if not a week. In the mean time, feed Mrs. betta well, lots of bloodworms if you have them. Keep her in sight of the male, as well. When she's plump and has a little white dot poking out of her belly from between her fins then you can get down to business. You can also tell if she's ready by checking to see if she has vertical stripes.

Put the male in the breeding tank. Leave him there for a day or so. Keep the female in sight. Keep the water clean by fishing out whatever he doesn't eat within a minute or two of giving it to him. He ought to build a nest. Keep feeding the girl, too.

Once he's settled in and everything, bring in the plastic, floating breeder trap and put it in the tank with the female, away from the nest. Give them a few hours to make faces at each other. From now on, the male should get NO FOOD until you take him out.

After they get to know each other, take the tube out, letting the female into the rest of the tank. There will be some chasing and biting, but she should eventually inspect the nest. If there is more biting than anything else, put the girl back in the breeder trap and try again later.

Eventually they will settle in and mate. A light should be left on at all times on the breeding tank until the male is removed. Mating will take up to a few hours, and the female should be removed once it is over.

The light should be left on, and the male will take care of the fry on his own for a while. It looks like he's eating them, but he's just spitting them back into the nest.

The eggs will hatch in about 1 or 2 days depending on the temperature. Once the fry are trying to swim along on their own in a normal fish orientation (horizontal) you should take dad out and start feeding them, if not a little sooner. You might need a magnifying glass to see the little things.