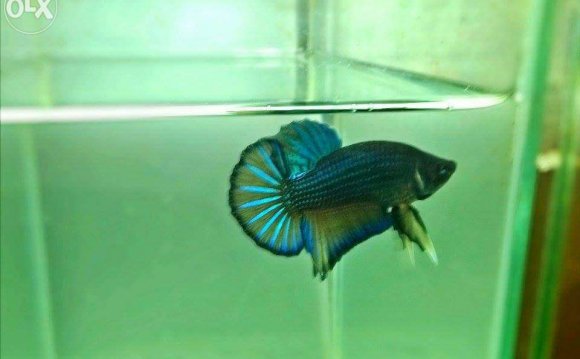 Stupid me! I still regret that choice but there isn't much I can do about it now. The other LPs Betta I found was also at Wal Mart. He was black with green iridescence on his fins. I had always wanted to try and create a black bodied, iridescence finned bi-color and here was a fish that exhibited those characteristics.

Thankfully, I was a bit more experienced and I snatched him up. I bred him with a show quality steel female. The fry have blue fins with a red wash but their bodies have very little iridescence on them and most of the fry are dark bodied. Their dorsal fins turned out beautiful as did their anal fins but their tails are beginning to veil, a dominate, but undesirable trait. I may or may not breed them, I haven't decided yet but that LPs male helped me to get a little closer to my dream. He still lives with me at home and I have only bred him once - he should be way past his prime by now. Regardless of whether I breed him again or not, he will live out his life a comfy gallon tank with a java moss couch, fresh frozen food every day and luxurious weekly water changes, a huge difference from life as a pet store Betta.

Recently I have added two more LPs Bettas that I rescued from school. A popular lab done in the Biology classes at my school is creating a self-sustaining ecosystem. This lab consists of one two litter soda bottle filled with soil, plants and bugs, connected to another filled with water, aquatic plants, and a fish -usually a Betta. The ecosystems are only run for 3 days so the fish don't risk starvation but it still bothers me to think that the poor Bettas, after 3 days without food, would go home and be fed to the toilet bowl because someone did not want to care for them. I am not about to attempt to convince my teachers, whom I respect, to discontinue the lab, so instead I offer a free home to anyone who does not wish to care for their Bettas. I also try to educate the teachers on proper...

"When I first got him home he was so faded I couldn't tell what color he was supposed to be. Now it looks like he is blue with red fins, but we shall see. He didn't eat for the first 3-4 days. I did daily 50% water changes and treated with Tetracycline the first day. I rarely use such a wide spectrum bacteria killer as Tetracycline but figured I needed something to clean out the injuries asap. After that I used melafix and salt. An extra pinch of aquarium salt added to the water has worked wonders for me. He finally ate some today. Once he has his appetite back a little more I have some high protein food I think I will try giving him to give him a boost to grow back his fins. I will also attempt some blood worms or brine shrimp."