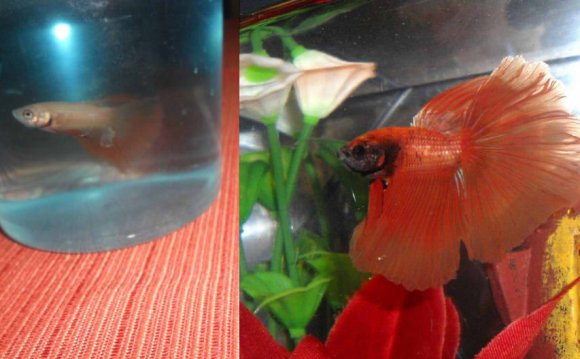 The betta (Betta splendens) is one of the most popular aquarium species, likely second only to the goldfish. Yet the majority of captive bettas die prematurely. Their early deaths are caused largely by improper environment, poor nutrition (to a lesser extent) and from mis-medication by well-meaning aquarists. Deaths from pathogenic disease (bacteria, fungus, parasites) are in the minority when it comes to sources of betta mortality.

This article is an attempt to label, identify and reveal the real reasons for this species’ troubles under human care and to help you give your betta a long and healthy life.

When keeping a betta, temperature and other water conditions must be considered. Betta splendens is a tropical fish, living in water in the upper 70s to 80s Fahrenheit. Cold water and small volumes in which daily thermal range and water chemistry vacillate are dangerous for bettas. This fish can indeed live in small volumes of water because the amount of oxygen in the water is not as important for them — bettas need to get to the surface to “gulp” air to breathe.

Aquatic thermometers are a betta keeper’s best friend. Check often to make sure the water temperature doesn’t drop below 70 degrees Fahrenheit. The temperature shouldn’t vacillate more than 3 to 5 degrees within a 24-hour period. Sudden changes in temperature weaken a betta’s resistance to diseases.

However, because bettas are often kept in tiny spaces, their water quality diminishes quickly. Bettas are no dirtier than other tropical fish, but they are often kept in small, totally unfiltered circumstances, and some have no established “nitrogen cycling, ” which is absolutely critical. There are a few ways to get this mix of useful microbes going. You can move water from another established freshwater system into your betta’s tank. You can also put in some live plants, “old” conditioned gravel or even commercial products that will “age” your system. However it is done, it is critical that your betta’s wastes be converted from the excreted and secreted (through the gills) ammonia into nitrite and then nitrate. If not, your betta is being poisoned. This can be prevented by changing the water frequently. For one male betta in a nominal volume of a half-gallon or so, change all the water every three to four days, using conditioner (no need for distilled or other fancy water). However, since most people lack the discipline and time to change the water this frequently, establishing the nitrogen cycle is the easiest way to keep your betta’s water clean.

Bettas can live in very small volumes of water — for a short time. They are shipped in a small amount of water and often sold in “betta cups.” They cannot live long, healthy lives in such settings. Larger volumes of water are inherently more stable. For example, oceans and large lakes mediate the temperature around them because water gives up and takes in energy more slowly than any other known substance. With a bigger area of water in your betta’s tank, temperature and water quality will not shift nearly as quickly or as much. I recommend keeping bettas in at least a gallon of water — remember that “bigger is better.”

When choosing a tank, get a cover for it or make sure there is enough room to keep the water level low. Bettas are known jumpers and are notorious for launching themselves out of their tanks.

Bettas must be housed with similarly peaceful animals. Small tetras (such as neons, Paracheirodon innesi), small catfishes (like Corydoras) and small livebearers, such as Endler’s (Pecilia wingei) are good choices. Feisty barbs (tiger barbs, Puntius tetrazona; ruby parbs, P. nigrrofasciatus), sucking Chinese algae-eaters (Gyrinocheilus aymonieri) and all but the smallest cichlids (Apistogramma and Nannacara, for example) are not good choices because they are likely to bite off the betta’s fins and eat all the foods. Two male bettas in one tank will fight, often until one dies. Only very large systems are suggested for mixing a male and female(s); otherwise, the male may end up killing the female.

Given a decent, stable environment and proper nutrition, infectious (bacteria, fungus) and parasitic (protozoans, ich, velvet) diseases in bettas are rare. The appearance of aberrant behavior and biological disease is almost always predicated on deficiencies in their system, foods and general care. The two most common agents of disease with this species are “ich” (or white spot) and velvet (aka Oodinium).