Where do Siamese fighting fish come from? 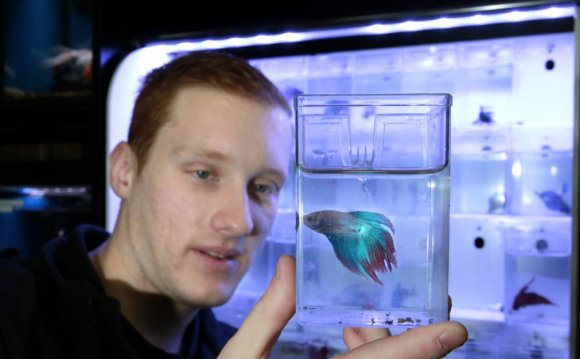 Also colloquially known as the betta (Betta splendens), is a species in the gourami family which is popular as an aquarium fish. This species is native to the Mekong basin of Thailand, Laos, Cambodia, and Vietnam, where it can be found in standing waters of canals, rice paddies, and floodplains. They are called pla-kad (biting fish) in Thai or trey krem in Khmer. They tend to be rather aggressive.

Siamese fighting fish have upturned mouths and are primarily carnivorous surface feeders, although some vegetable matter may be eaten. In the wild, they feed on zooplankton, crustaceans, and the larvae of mosquitoes and other water-bound insects.

Male bettas flare their gills, twist their bodies, and spread their fins if interested in a female. The female darkens in colour, then curves her body back and forth as a response. Males build bubble nests of various sizes and thicknesses at the surface of the water. Plants or rocks that break the surface often form a base for bubble nests. The act of spawning itself is called a “nuptial embrace”, for the male wraps his body around the female; around 10–40 eggs are released during each embrace, until the female is exhausted of eggs. The male, in his turn, releases milt into the water, and fertilization takes place externally. During and after spawning, the male uses his mouth to retrieve sinking eggs and deposit them in the bubble nest (during mating the female sometimes assists her partner, but more often she simply devours all the eggs she manages to catch). Once the female has released all of her eggs, she is chased away from the male’s territory, as she will likely eat the eggs. The eggs remain in the male’s care. He carefully keeps them in his bubble nest, making sure none falls to the bottom, repairing the bubble nest as needed. Incubation lasts for 24–36 hours; newly hatched larvae remain in the nest for the next two to three days until their yolk sacs are fully absorbed. Afterwards, the fry leave the nest and the free-swimming stage begins. In this first period of their lives, B. splendens fry are totally dependent on their gills; the labyrinth organ which allows the species to breathe atmospheric oxygen typically develops at three to six weeks of age, depending on the general growth rate, which can be highly variable. B. splendens can reach sexual maturity at an age as early as 4–5 months.

Males and females flare or puff out their gill covers (opercula) to appear more impressive, either to intimidate other rivals or as an act of courtship. Other reasons for flaring is when they are startled by movement or change of scene in their environments. Both sexes display horizontal bars (unless they are too light a color for this to show) if stressed or frightened; however, such a color change, common in females of any age, is very rare in mature males. Females often flare at other females, especially when setting up a pecking order. Flirtingfish behave similarly, with vertical instead of horizontal stripes indicating a willingness and readiness to breed (females only). In fact, the fish flare their fins and gill covers as a sign of aggression or flirting with other fish.

The aggression of this fish has been studied by ethologists and comparative psychologists. These fish have historically been the objects of gambling; two male fish are pitted against each other in a fight and bets are placed on which one will win. One fish is almost always killed as a result. To avoid this, male Siamese fighting fish are best isolated from one another. Males will occasionally even respond aggressively to their own reflections in a mirror. Though this is obviously safer than exposing the fish to another male, prolonged sight of their reflection can lead to stress in some individuals. Not all Siamese fighting fish respond negatively to other male fish, especially if not too many of them are present.

Bettas sometimes require a place to hide, even in the absence of threats. They may set up a territory centered on a plant or rocky alcove, sometimes becoming highly possessive of it and aggressive toward trespassing rivals.

As a Totem and Animal Spirit, to fully appreciate the symbolic meanings of this fish, we must first consider their watery domain. Water holds ancient symbolic meanings dealing with the subconscious and depth of knowledge. Water contains all the mysteriousness of the unknown.

Water holds endless mystery to us – it represents that which is certainly there, but cannot be seen. It has also been known to be a womb symbol and as such, an emblem of birth, fertility and womanhood. This association comes from many ancient flood myths, and the “from water springs life” concept.

So, in many traditions The Fish symbolizes Freedom, Independence, Potential, Adaptation, Femininity, Deep Knowledge and Creativity.

They can teach us to adapt to all environments and to streamline our lives; they can give us protection when we need it and connect us to the creative element of life: water. The Fish moves freely through water, which is constantly flowing, and the Fish totem is an excellent teacher of transitions through life.

A Fish swimming down symbolizes the involution of spirit, while a Fish swimming up is the evolution of the spirit. They reveal the strength of the currents of our lives and see clearly in the murky waters of the future.