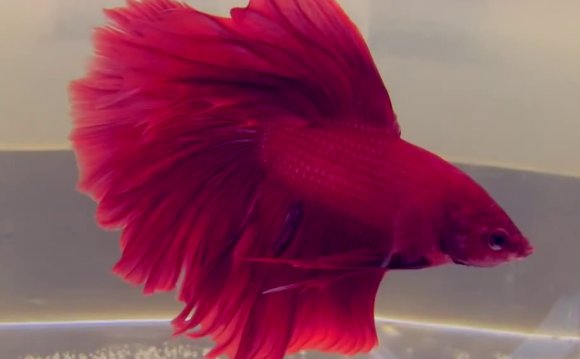 While most aquarists know only the eponymous betta, Betta splendens, the genus Betta contains some 70+ species. Most of them are overshadowed by their famous cousin, often simply called “the betta, ” particularly in the United States (where the antiquated common name of “Siamese fighting fish” is now somewhat out of favor). However, just as there are cichlids other than oscars, there are numerous other bettas that are incredible aquarium fish.

One of the species I have long sought after is B. rubra, commonly called the Toba betta. As the specific name implies, this is a truly beautiful, bright red fish. When resting, the males are typically a deep wine-red on their top half, with bright red and blue stripes on the bottom half. The fins and tails are bright red, with usually white or blue flashing on the edges. Like many bettas, they're able to rapidly change color depending on mood. In spawning condition, the colors can intensify, making the fish literally glow. It’s a stunning sight to behold.

The females of this species are quite a bit less colorful, with a neutral, drab, gray-brown base color and a dark stripe along the body. There can be a little bit of red or gold, particularly along the face, and the fins are often white-edged.

In August 2014, I was surprised to see these beautiful fish available from a handful of suppliers (mostly in Singapore, but also in the United States) and was able to obtain a pair through my company. I had previously placed a custom-made aquarium on a ledge in my entryway and had been trying to find something that would do well in the oddly shaped tank without filtration.

This tank is approximately 20 inches (50 cm) long, 6 inches (15 cm) wide, and 8 inches (20 cm) deep, and holds only about 5 gallons (19 liters). Because it is visible from all sides, I preferred not to have a visible filter on it, so I wanted something that would do well with only live plants. The tank had languished with my indecisiveness until I found the B. rubra pair.

The tank had been set up to be lightly planted, with some hardy Anubias and a low-growing Vallisneria. I supplemented this by adding a large section of bamboo, a few ceramic caves, and some Cryptocoryne parva, a tiny crypt that seemed well-suited to this size tank. Bettas, of all species, appreciate cover along the top, so I also added some duckweed. While duckweed is generally a nuisance in the aquarium, it does absorb incredible amounts of nutrients from the water and provides shade.

I also added a handful of oak leaves to the tank. These leaves slowly break down and must be renewed from time to time, but they release tannins and other beneficial compounds into the water. This helps lower the pH and infuses the water with a light brown color. Many aquarists purchase Indian almond leaves for the same purpose; I've never particularly understood why. I'll gladly sell you all the oak leaves you can rake from my front yard. Besides oak leaves, beech, walnut, and many other native trees have leaves that are high in tannins and work just as well—just be certain that they're from a clean source and free of pesticides.

Having decided upon placing a wild betta into the tank, I knew I also desperately needed one other piece of equipment—a top! Bettas are some of the most amazing jumpers out there; they put killifish to shame. They are able to jump out of tanks with uncanny accuracy through the smallest of openings. (I have finally come to the conclusion that they do not actually jump but are attempting to teleport—only they have rotten luck and spectacularly bad aim.) For this reason, it is important that any top placed on the aquarium be tight. Even small gaps can be exploited, and can result in your beloved fish becoming a dog treat. Tight tops also help to keep a layer of warm, humid air above the tank, which is vitally important. However, they should never be completely airtight because the fish will need fresh oxygen. Of course, an air pump will render that concern moot.

Bettas are members of the suborder Anabantoidei, which contains gouramis, bettas, ctenopomas, and a handful of other closely related fish. These fish utilize a special organ, known as the labyrinth organ, to access atmospheric air—virtually breathing air. This allows them to thrive in small, sometimes stagnant, pools of water.

In many species, the labyrinth organ is so well-developed that the fish will die without access to atmospheric air. In other words, you can drown your fish by keeping them underwater if there is not an adequate gap between the surface of the water and the lid, or if this layer is allowed to go stale. The layer of air must also be kept warm and humid because breathing dry or cold air can be damaging to the fish. This is particularly important during winter months, when our homes begin to dry out. The tight-fitting glass lid helps keep the air satisfactory for bettas.

B. rubra hails from stagnant peat swamps with a relatively low pH. These swamps are often stained quite darkly with tannins, so I thought my pair would definitely appreciate water with the oak leaves. Driftwood and coconut shells also release tannins, though to a much lesser extent. While in an ideal situation I would have liked to add a slowly bubbling sponge filter to the tank, I opted to allow the plants to act as filtration, as the sponge would detract from the display.

Although all species of Betta, including the domestic betta, can survive without water movement, and tend to handle even the worst water conditions, this is not ideal. All species are susceptible to stresses brought on by poor water conditions, and regular partial water changes should be done, especially if the tank is not filtered. In this particular case, the tank would be very lightly stocked with a lot of plants, and regular water changes must be performed to maintain optimal water quality.

After preparing the tank, I placed the pair into it, along with a half dozen crystal red shrimp. Oddly enough, these small shrimp mysteriously vanished within a few days (and I swear the bettas sure did look happy). I had hoped that the adults were large enough to avoid predation, but instead I provided a supply of live food in the form of baby shrimp. Unfortunately, I underestimated the size of the Toba betta’s mouth.

Wild bettas sometimes have a reputation for being finicky eaters, but I seldom have problems getting these fish to eat. (Don't ask me about the B. persephone that swam around in tanks full of live food until they starved to death.) My B. rubra ate everything I offered, with gusto. I fed a mixture of prepared flake foods, live mosquito larvae (in the summer), blackworms, whiteworms, and daphnia, sometimes supplemented with their frozen equivalents. The B. rubra quickly reached mature size and began to display beautiful coloration (though, regrettably, they were quite shy).