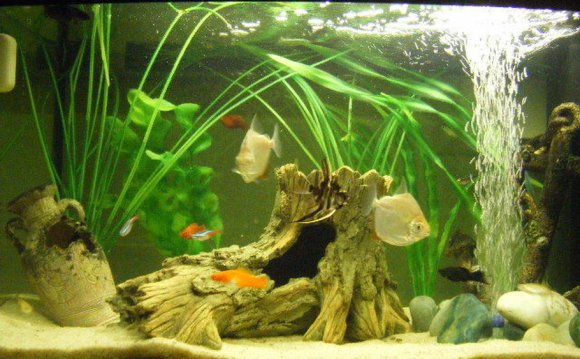 There’s a local Mexican restaurant in my area that has two huge fish tanks on display in the lobby. The tanks feature fish of all colors, shapes and sizes. This is really cool to look at while waiting to be seated, and it’s an awesome conversation piece.

Fish make great pets because they require less maintenance than a dog or cat. They’re good for kids as well because you can start teaching them about the responsibility of owning a pet without going all in right away.

That said, there are some things you should know so that you’re raising happy, healthy fish from the start.

There are several considerations about the environment of your tank. I’ve listed a few of them below to help you get started.

My younger sister has killed her fair share of county fair goldfish over the years. This is through no fault of her own, but rather due to the persistence of a popular myth that goldfish can safely be kept in a bowl.

In reality, goldfish are messy eaters that can actually grow to be quite big in adulthood. A small environment like a fishbowl may not be best. Smaller fish like guppies, white clouds and bettas will work well in this type of environment. You really don’t want any more than a couple of fish in a bowl at a time.

Also, keep a betta by itself. It’s not called the Siamese fighting fish for nothing. They’re very aggressive and even when they aren’t the aggressor, other fish can attack their long flowy fins. These guys prefer to swim alone and like to hide. That said, it’s a beautiful fish. I once owned a purple betta named Barney that lived quite a long time.

Another important point is that your fish quite literally need space to breathe. For scientific reasons, more surface area equals more oxygen. There’s also more surface area in a wider tank than a tall one. You can put more fish in the tank that’s bigger width-wise than a comparable tank that gets the same amount of space from its height.

You should try to check out online how much space your fish will need before purchasing it. For example, take the case of Flounder from “The Little Mermaid.” The fish that most closely resembles Ariel’s friend is not a flounder fish at all, but instead a blue ring angelfish. It’s recommended that he have at least a 220 gallon tank, which will be more expensive.

While the right tank size for you will depend on a number of factors including your space constraints and the number of fish you want to have, this site provides the guidelines on the right tank size. You can get tanks as small as around 2.5 gallons, but when in doubt, go a bit bigger and provide more space for the fish. A 29-gallon tank will only take up about 30 inches of width and is just over a foot long.

The next consideration to make is whether you want a freshwater tank or a saltwater tank.

Saltwater can be more expensive, but you can raise fish that are native to the ocean. The clown fish (think Nemo) lives in saltwater and can do well in a tank as small as 20 gallons. It’s considered easy to care for.

A freshwater tank may be best for someone just looking to get their feet wet, but if you’re an experienced hobbyist looking for something new, saltwater might be worth a look.

When considering the environment in which your fish will be swimming, you need to take into account the acidity of the water by testing pH level. Some fish have more specific requirements, especially if you’re breeding them, but most fish can survive a fairly wide range. The most important thing here is to make sure the pH stays relatively constant and there are no wild swings. If you’re planning to introduce a fish with specific pH requirements, change the environment in the tank gradually.

If you have tropical fish, you may need a water heater to keep the tank at a temperature they find comfortable. You’ll definitely need a water filter in order to clear nasty particles out in between water changes. If you have a heater, it can have the effect of removing some oxygen from the water. You can replace that oxygen using an air pump which releases bubbles, creating more oxygen in that area.

When you’re ready to do a water change, a lot of people put the fish in a different container. This is fine, but make sure to put them in a new container with the original tank water because it’ll cause less stress.