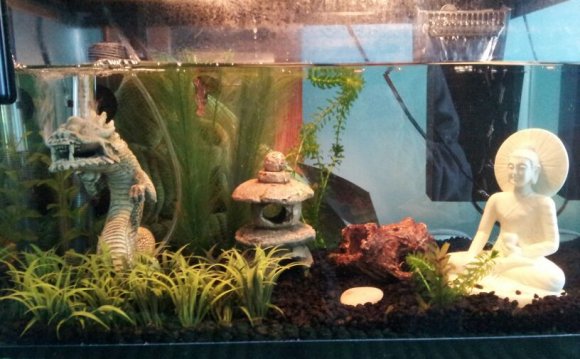 The Betta, (a.k.a. Siamese fighting fish), is a beautifully colored fish, often seen by itself in small ball vases in the pet section of your favorite big-box department store. But is it better off living alone in such a tiny environment? Surprisingly, YES!

First discovered in Southeast Asia. The Betta's natural home is shallow stagnant water like found in flooded rice paddies, & drainage ditches. The betta became adapted to frequent flooding and severe droughts. The drastic changes in its environment made the fish adapt - retaining a primitive lung called a labyrinth. Labyrinth fish have the ability to breathe oxygen directly from the air as well as take in oxygen from its gills. As a result, labyrinth fish can survive short periods out of water if needed, inhaling the air around them & surviving, provided they stay moist. This is why a betta can sustain itself in stagnant, oxygen-deficient water.

Betta's have distinctive upturned mouths and feed at the water's surface. In nature they would feed on mosquito, dragonfly & damselfly larva, but in a domestic world a good diet consists of dried bloodworms, brine shrimp or daphnia. Our commercial betta & frog food pellets are ideal because it combines all three foods, in addition to vitamins and minerals. This improves the betta's brilliant coloring and longevity.

Unlike other fish species, they are not a schooling fish. They are highly territorial and will fight with each other, regardless of gender. Betta's swim alone and like a comfortable place of their own.

With the EcoAquarium's natural filtration, the care & upkeep of a Betta EcoAquarum® is very easy. Keeping everything out of sunlight, water condition is largely self-regulating. Unlike tiny aquarium bowls of just fish & water, the EcoAquarium™ has sustained bio-filtration, and does not need frequent water changes. By avoiding overfeeding, your tank can go several months without need for major tank maintenance, wits only the occasional topping off with bottled spring water, to replace what may have evaporated, the only water changes necessary. You can use a small turkey baster to siphon debris from the bottom of the tank.