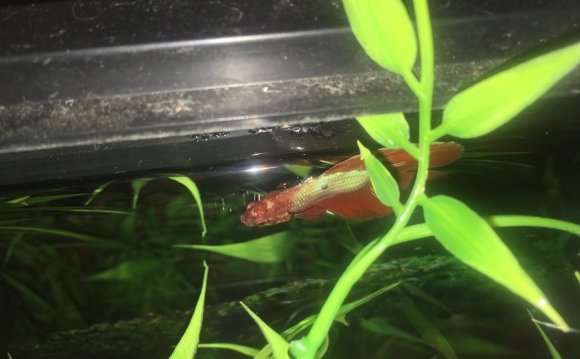 I've had my VT Betta Bluey now since June, 2011, which would make him close to 4 now. He's always been healthy...no illness even once since I've had him. About 2 weeks ago, he suddenly started to occasionally refuse food. I didn't think much of it. However, this past week he's now refusing food almost entirely.I drop it in, and he completely ignores it. He has also become very skittish...whenever I put on his light, or approach his tank, he darts behind his plant, which is really abnormal behavior. Just today I actually saw him laying against his IAL, which is not like him at all! He still flares like crazy, but in between that the lethargy seems to be worsening.

His color and body look good-he's royal blue, and pretty big for a Betta fish. No bloating or evidence of disease that I can see outwardly.

He's in a 2.5 Gallon heated, unfiltered tank with some Fake plants and also some Java Moss.I do 100% water changes about every 6 days.

Any advice for me? Is this the beginning of his decline into old age? I'm SO attached to him, and if he is starting to die, I'm totally not prepared for it. Help!!

It could be related to aging, because bettas usually don't live very long. A larger aquarium with a slow flowing filter would be better than his present habitat, and a 100 percent water change involves the stress of being netted, then having water parameters suddenly changed. Stress will damage a fish's ability to fight off opportunistic diseases and parasites.

That said, you must have been doing something right, because the betta has already lived longer than most. A five or ten gallon aquarium would be a better habitat than the 2.5 gallon tank. If the aquarium had a working nitrogen cycle, you could maintain water quality by feeding no more than the betta eats in a couple minutes and changing 25 or 30 percent of the water once a week.

As noted in the following link, this is more or less standard aquarium keeping procedure:

Many of us form close bonds with our pets and usually outlast them, so we must suffer through their death. The suggested partial water changes may prolong the betta's life and are thus worth a try. Good luck, and please keep us updated.