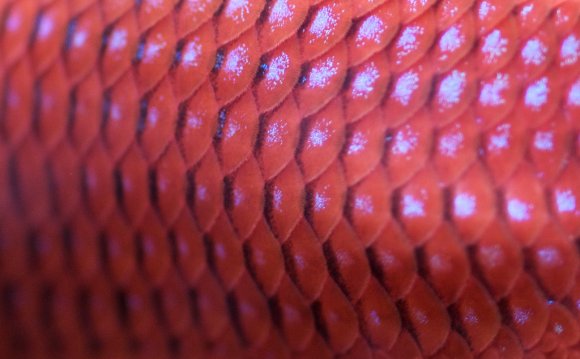 Being overweight is very subtle in fish. They often don’t get fat under the skin but over the muscle like humans, but rather around their internal organs. However, you can still tell if a betta is overweight by looking at them. You’ll need a clear view of them laterally (from the side) and dorsally (from the top).

From the top (ish) Notice how even his muscle mass is deteriorating. He was starved so badly his body started to eat itself to survive. A severely emaciated betta pretty much looks like a ball on a stick from the top. This is the easiest angle to check for a good weight.

This guy is underweight, but still has some muscle left. His body doesn’t taper as drastically.

vvvv This is an ideal weight.He has a slightly larger head and the area behind his gills is full (this is where most of the organs are) and the rest of his body is round but not tubular, it still tapers to a point. vvvv

This guy is starting to get chubby. I didn’t have a good picture of him from the top, but you can see how he is much more tubular in shape, there is less tapering to his tail.

This guy is fat. He is one solid tube, his body barely tapers after his head.

From the side. Once again you can see how thin he is because he doesn’t even have any muscles left. His spine is visible and even his head/stomach area is very small.

This guy is still underweight, but not as bad as the previous. Like I said it’s easier to tell from the top but he’s still got a very small body.

vvvv This is an Ideal weight.He’s turned his head slightly to the camera but you can see that he’s got a good arch to his back, his spine is not visible and his body is full. vvvv

This guy is getting thick.

And this guy is overweight. He’s just one big thick tube of fish. Even the area around his head is rounded.

So yeah. If you fish is underweight, check their feces for parasites.

If it’s stringy and white, it’s got internal ones and needs medication and to be fed high quality foods in the mean time (frozen bloodworms, frozen mysis shrimp, blackworms, etc. No flakes and don’t bother with pellets more than once a week). until he gains weight. If he is overweight, feed him a normal amount of food but give him “exercise”. Show him a mirror or other male and make him flare for 10mins a day. This is as easy as taping a mirror to the tank. However, some males only flare at females so this can be a little tricky. If you have a overweight female you can make them jump for their food or teach them tricks so they have to burn calories to actually get calories. Do not decrease their food intake or starve them, they still have a basal caloric need.