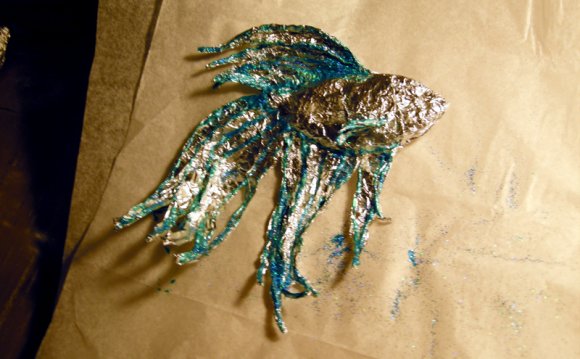 I've enjoyed chasing the threads regarding bettas, and I've noticed some havent' been updated since 2005. So I have some questions regarding my set up and whats going on in the tank.

I have a betta splendens (veiltail, blue) in a 2.5 gallon spherical fish bowl. The substrate is small lava gravel and smooth river stones accented by some larger smooth stones I found on the beach. I have an "African Fern" (Ceratopteris) which is doing well and have just removed a Swordplant (Echinodorus) which got slimy cottony white stuff where the leaves emerge from the root system. Bowl gets a lot of indirect bright sunlight during the day and is lit with an incandescent 25 watt lightbulb until about 2 am or sometimes all day if I forget to turn it off. My fish, Prince Beideman, is happy, active and a prolific nester. He lives in his bowl with no filter and only the ambient heat. This bowl was set up a month ago, the fish moved in 4 days later and I just did a %10 (2 litre) water change last week.

The guy at the fish store told me I should only feed Prince B. 2 or 3 times a week and sparingly at that. I like that, but some people feel one should feed a betta once a day. They'll eat it, what's healthiest in your opinion?

I have some 1 inch white milipedes that like to hang out at the bottom of my potted plants. Could I chop them up and feed them to Prince B.? They are really small. I know that bettas like live food, but are millipedes dangerous or poisonous?

Because of the bright light I'm getting green algae on the rocks and the glass. I don't really mind it on the rocks, but don't want to impede the visibility of being able to see my fish. I'm going to just scrub it out with my hand in the tank while my fish is in the tank with a nylon scrubber when I change the water. Thoughts? I'm not going to move my betta bowl anywhere else, so I'm prepared to deal with the algae. I've been told that it can't harm the fish and adds an aged patina to any aquascape. True?

Snails may eat algae, but they put a lot of waste in the water. In this set up I feel its not feasible.