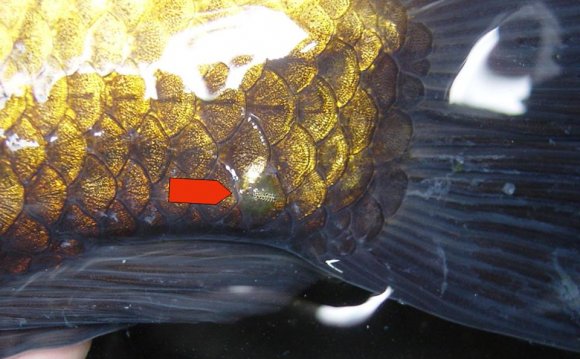 Velvet is caused by a parasitic infection, and is highly contagious and will soon affect all fish within the tank. Velvet is both painful and annoying to your fish, and they may begin to act in an unusual manner when affected by the condition, appearing hunched up with their fins clamped closely to their bodies, and scratching themselves on the tank furniture in an attempt to relieve the associated itching.

The velvet parasite requires light to thrive and reproduce, and so velvet is best treated by a combination of keeping the tank in the dark, raising the water temperature slightly, and possibly adding aquarium salt to sterilize the water too.

Swim bladder is one of the few fish illnesses that are non-contagious, and can be caused by injuries or poor feeding habits.

The swim bladder is an air-filled chamber within the body of the fish, which helps to provide their buoyancy in the water. Damage to the swim bladder that affects this buoyancy will cause the fish to have problems with swimming and maintaining their position in the water.

There is no specific medication for swim bladder problems and the situation will often correct itself over time. You can try fasting your fish for 48 hours then feed very small amount of boiled peas with the shells removed to help expedite the process.

Dropsy is probably the most severe of all the betta fish diseases and a killer among aquarium fish of all types. The betta is no exception.

Dropsy is essentially kidney failure of the fish, causing a fluid build-up within the body and the scales of the fish to take on an erect/protruding appearance.

While dropsy itself isn’t contagious, the bacteria that causes it is, and so affected fish should be isolated promptly to prevent the condition from spreading. Affected fish will usually die within 5-15 days, and the condition cannot be cured.