Getting a Betta fish 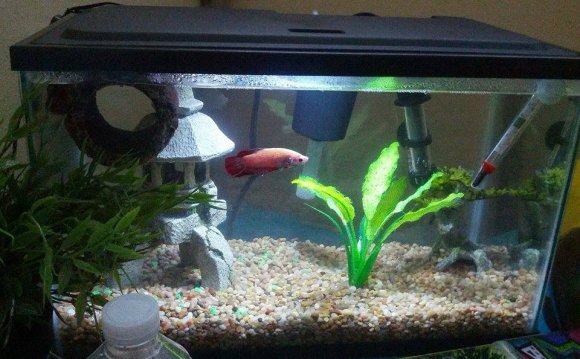 Do the right thing and put your betta in a good-sized tank.

Several years ago, when my daughter was a toddler, she was given a beautiful blue betta fish. It was a wonderful gift. She loved to watch the fish swim around in his bowl, and was just the right age to help me take care of it a little bit. I kept him in a glass bowl that held maybe a quart or a half gallon of water, and cleaned it out for him once a week. I was fairly new to being a stay-at-home mom, and as silly as it sounds that the fish was my companion, I loved having him there in the kitchen with me, especially when my daughter was napping, the house was quiet, and I was doing some mundane chore like washing the dishes.

The fish lived about 6 months. He stopped eating one day and finally died a week or so later. We waited awhile and replaced him with another. This one lived a few months, also. I just figured that was the way things go with betta fish. I thought I was taking great care of him. After all, bettas are found in puddles in the wild, right? I was told they they actually prefer living in a cramped little bowl.

Fast forward a few years, and I now have a son as well as a daughter. His elementary school was having a fundraiser where they were selling all kinds of science-related gadgets and toys, including a few small pets such as tarantulas, fire-belly toads and betta fish. My son asked for a fish, and fondly remembering the two kitchen companions of previous years, I was happy to oblige. He picked out a beautiful blue betta, named him Tsunami, and brought him home in a tiny cup.

I thought we were already all set up to take care of little Tsunami. I dug out the old fish bowl, and even found the little vial of betta food. I was happy that I was able to make a small $5 purchase, and my son would get so much happiness and education out of that $5, with no need to invest any more cash, except for some water conditioner to neutralize the chlorine in our water. Well, I was wrong.

Having been born into the information age, my son is a great Googler. As soon as he brought the fish home, he started googling and researching about his new pet. The information that he found was a huge eye-opener for me. I learned that I was doing it all wrong. Bettas will not thrive if kept in a little bowl. Yes, they will survive for awhile, but will be stressed, bored and unhappy. Additionally, the waste toxins build up very quickly in such a small amount of water, making the water they are forced to live in hazardous to their health. If you decide to keep your betta in a little bowl, do your fish a favor and change his water every day. I always thought it was so cute the way our bettas would be so lively and energetic right after I did their weekly water change. Now I know they were thrilled to finally be able to breathe again.

My son's betta is in a 5-gallon tank. Tsunami loves it, and by no means does it seem too big for him. There is plenty of room for him to swim around freely, which he does. If your betta sits in his bowl all day, put him in a tank and see how active he is, and how much he enjoys swimming from side to side. The 5-gallon tank also offers plenty of room for a gentle filter, a heater, some soft plants, and his favorite tank accessory, the "floating betta log." The 5-gallon tank sold by Amazon is a complete kit with lots of accessories and supplies, and costs more than $40. You can get a plain 10-gallon tank on its own at Walmart for about $15.