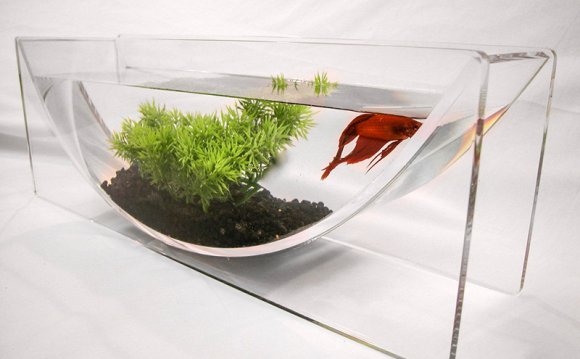 Fish bowls have contained fish for entertainment and aesthetic purposes for more than a thousand years. The most famous fish kept in a bowl is the goldfish, and this was indeed the first fish kept in captivity as a "pet." The Sung dynasty of 900 A.D. China is recorded as the first goldfish keepers, and this spread to Japan, and then to Europe when the far east became opened for trade. Unfortunately, goldfish are one of the most inappropriate fish to be kept in a bowl, but due to their hardiness and ability to live under horrid conditions, they are still found in bowls, even though the common "feeder" variety can grow to a foot in length.

Though goldfish are not suited for bowls, there are several other fish that can live in an unfiltered, unheated environment. Many aquarists frown on the fish bowl, thinking it cruel or inhumane. Often, fish are anthropomorphized when it comes to their keeping in small spaces, and people claim their psychology and longevity is negatively impacted. But this argument can also be made for any aquarium as it is not their natural environment, and thus could be regarded as "cruel" because it is, after all, a rectangular prison surrounded by glass. Personally, I believe there is a line in fish keeping... and it is crossed when fish are kept in spaces so small your fist could barely fit into the tank, such as the infamous Aquababies cell, yet it is acceptable in larger 1-2 gallon bowls or vases where the animal has some degree of swimming room.

One of my most stable and beautiful tanks is a 1.2 gallon glass vase. This tank is remarkably easy to set up and maintain; it can be kept on desks, tabletops, shelves, or workstations; there is little maintenance required, and it is a wonderful system for someone who has little desire to invest the time or money in a larger, filtered and heated system.

Here are seven easy steps in making a bowl or vase system just like mine.

1. Obtain your bowl or vase. Craft or hobby stores are usually the best, though Wal-mart is known to sometimes sell large and cheap vases. The larger the bowl or vase the better. Try to find a bowl with as much swimming room as

possible, and try to find an opening that gives a small net full access to the interior. I have a 1.2 gallon vase, but you could probably find a larger one. Glass is more pleasing to the eye, but plastic is also acceptable. A good vase or bowl may run you anywhere from 5-11 dollars. Believe it or not, this is going to be your biggest expense!

2. Try to gather some cultured gravel. The difference between new gravel and "cultured" is that the cultured kind is ripe with healthy bacteria, the stuff that breaks down the ammonia from the fish waste into the less toxic forms of nitrogen, nitrites and then finally nitrates. Many live fish stores will sell you or give you a couple handfuls of gravel from their aquariums. Ask to get some from their show or display systems because disease is much less likely in these pretty, non-sale tanks. Layer the bottom of your bowl or vase with 1/4 to 1/2 an inch of gravel.

Note: This step is not entirely necessary! You could easily start with new, uncultured gravel and use a hardy fish like a male or female betta to "seed" the gravel with the good ammonia and nitrite eating bacteria. If you elect to use new gravel, however, be sure you wait 2-3 weeks before you add other fish like white clouds or ghost shrimp as these fish are much less tolerant toward high levels of ammonia and nitrite. Also, daily water changes of a cup are a necessity to keep your betta in optimal health during this stressful time.

3. Plant your base with some forgiving, easy aquatic plants. Java moss and anarcharis are the absolute best plants for a bowl or vase. I strapped a handful of java moss to a river stone with fishing line, and then I plugged six stalks of anarcharis (or elodea) beneath the stone. In addition to the aesthetics, plants help regulate the nitrates because plant life consumes the CO2 fish breath out in their gills, as well as the dissolved organics from fish waste. These plants do not need direct light and will thrive in any room open to natural sunlight; I keep mine on my computer desk right next to the window, and the elodea is starting to look like an aquatic jungle.

4. Fill with dechlorinated water. Buy a bottle of dechlorinator, any brand will do, and dechlorinate your water before you fill the vase.

5. Add fish. With your plants that provide the system with oxygen, you have many more options with fish life than you would a vase with plastic plants. A male or female betta is a great centerpiece fish. The females, while not as colorful or large as the males, are generally less aggressive. White cloud mountain minnows are another good choice. These fish, like goldfish, can live in cold water environments. You could probably squeeze three or four into a 1.5 gallon vase. Other options would be zebra danios or neon tetras. For bottom feeders, ghost shrimp are great fun to watch and really clean out the bottom of the tank. Another choice would be African dwarf frogs.
Again, please stay away from goldfish. They grow to massive sizes and will be stunted in a bowl... of course, most goldfish sold are used to feed other fish or just go to a bowl anyway, so... make your own decision, but don't say you didn't know they were ill-fitted for a bowl or vase.

6. Feed fish a small amount of food every day. By minimizing your feeding, you keep the system cleaner, and also the fish healthier. Fish can go for up to a week without food, but please don't forget them. If you leave for a 3 day weekend, your fish will be fine-whatever you do, DO NOT purchase one of those white chalky pyramid "feeders." Those things will pollute your water and you will find your vase a nasty soup upon your return home.

7. Change out a cup of water every day, or every other day. This is the most labor intensive point. I use 8 oz. plastic cups and I simply keep the waterline low enough so the cup will not overflow the vase when I'm water changing. Dip the cup into the bowl, fill it with water, remove, then replace with fresh, dechlorinated tap water. This procedure can be done in less than a minute, and your fish and plants will thank you for this daily water change-out in the long run. Also, you'll keep the algae at a standstill-this is an absolute must if your bowl or vase is near a window.