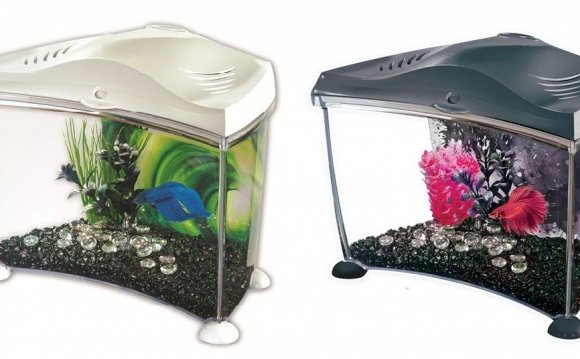 Are you considering purchasing a new aquarium heater for your small freshwater tank?

We recently purchased a 5 gallon aquarium which would become the new home for my daughter's Betta fish. While we wanted to upgrade him from the temporary bowl she was using to a larger home, more importantly we knew that with the fluctuating evening temperatures we needed to get him into an environment that included a heater before the water temperature got too low than the tropical temperatures that we needed to maintain.

In the evenings, the ambient temperature inside our home began to drop to about 70 degrees. We rarely use heat in the house as we live in Florida, but in an effort to keep the bowl warmed, we were running the heat at night to maintain a 76 degree room temperature which would help keep the Betta at the lower end of the tropical temperatures he is meant to be kept in. As an additional precaution, we wrapped the bowl in thick towels to help insulate it as much as possible.

While the new tank was cycling, I began researching the aquarium water heater options and was getting even more confused with all that was out there.

There were a few things I knew I wanted in a small aquarium heater:

Aside from those features, I was clueless. After reading more reviews of different small fish tank heaters than I can remember and after posting on a fish forum without any responses, I set off to the local big box pet store looking for a solution from the advice of the store employees.

While companies do manufacture heaters that indicate they are safe to heat small 1-gallon fish bowls, they're not safe. After much research on what could have been a simple solution, I learned that these flat, round bottom heaters can literally fry a fish as can be read in the numerous reviews on sites such as Amazon. Although they may be 7.5-watt heaters, they're not reliable and certainly not for use with a 1-gallon bowl.

A good rule of thumb to determine what size heater you may need for your small aquarium is:

5 Watts for every 5 Gallons

This is not an absolute rule as different heaters may work more effectively than others, but this will help guide you to finding a heater that is better suited for the size tank you need.

Not All Low Wattage Aquarium Heaters are the Same

Since we were upgrading to the 5-gallon tank, I did not even consider a temporary solution such as the Betta Bowl Mini Heater made by Zoo Med. While companies may advertise they're safe, a heater in anything as small as a 1-gallon bowl is too dangerous for any fish, especially if you can't maintain a tropical temperature. I would not advise using these at all, unless you're willing to sacrifice your fish.

During my research, many of the reviews I read suggested a 25-watt heater. So, I went looking for one at my local big box pet store. What I found was that some 25-watt heater labels indicated they were for up to 5-gallons, some were for no less than 7 gallons, but no more than 10 gallons. It got so confusing and frustrating!

On the market, there are 7.5w, 10w, 15w, 25w aquarium heaters- all indicating that they will work just fine for a tank 5 gallons and under. BEWARE! Not all low wattage heaters are the same!

After looking carefully at all the packaging and sizes and wattages, I picked up a 25-watt heater, a Top Fin® Submersible Aquarium Heater, which, according to the box was advertised for tanks up to 5 gallons. It had an internal thermostat, was adjustable, and fully submersible. It wasn't quite as small I was looking for, but we could have made it work. When the store employee asked if I needed help, I explained what I was doing and she said that the Top Fin® heater I had in hand was too powerful.

She handed me an Aqueon Mini 10 Watt Heater. And, so I gave it a try.

The Aqueon heater was inexpensive enough (about $14) and I had several weeks to try it before the Betta would be added to the tank, so I decided to give it a try.

The features of the Aqueon Mini Heater 10 Watt included:

The heater came with two mini suction cups that were easily attached. The installation was simple - put it in the tank, slightly push to engage suction cups, then plug it in.

After several hours, the temperature of the water increased from about 74 degrees to about 78 degrees where it maintained most of the time. I installed the heater on the side close to where the bowl with the Betta was and touched the side of the bowl to the side of the tank. The Betta hung out there as he could obviously feel the warmth from the heater through the glass.

This would have been the heater that I kept, except for one small issue. It indicated in the manual that if the ambient temperature reached 78 degrees, to unplug the heater. Since we were still cycling without the fish, we could test what happened when the room temperature increased. Here in Florida, it's not unusual during the winters for us to have outdoor temperatures in the 40s in the morning and 80 in the afternoon. What we found was on the warmer days, the tank's temperature was increasing up to 86 and at night was dropping to about 76-78. The room temperature was about 78 and 69 respectively.