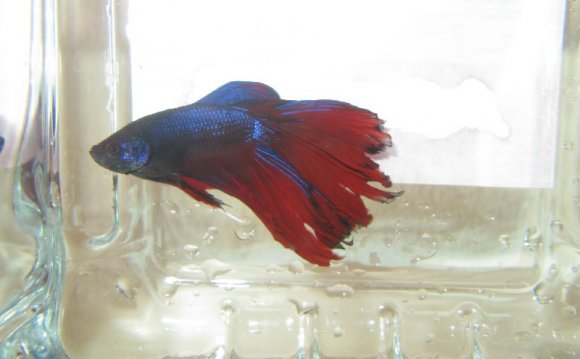 I'm not sure what kind of tank you mean by hallow, but I can tell you that the main problem with your fish is improper habitat. Beta fish don't "sleep" on the bottom.

The problem with beta fish is one created by the pet industry. They're trying to sell stuff to make money and most don't regard the well being of the fish as primary. Beta's can gulp air, so the pet stores figured that they can put them in a super small container that would kill any normal fish due to lack of oxygen exchange. They'd suffocate to death. Now a beta doesn't cost that much, but it's not just the beta. It's the little tank, it's the food, it's the water test kits and treatment drops for chlorinated water. Because betas are billed as a low maintenance pet that appeals to parents with kids who want pets, but don't want to take care of them.

The truth is that a beta fish can survive in the horrible conditions they are typically kept in, but they'll quickly degrade and die. Yes, they can gulp air, so the low oxygen content won't kill them outright, but the smaller the area of water the quicker toxins build up. Even changing the water frequently will lead to problems, because you're constantly removing good bacteria with the bad and introducing new water that has to reestablish good bacterial colonies. That's not even counting that most people have chlorinated tap water that isn't that good for fish, even when treated. People start having happen, what you've experienced. They get a healthy looking fish in a tiny plastic cup, bring it home and put it in a giant "comparatively" bowl, and it starts sitting on the bottom, loosing color, fins become damaged, and it soon dies.

Now I'm not lecturing your or saying you've done anything wrong. I just wanted to explain the situation as I see it. That's just explaining why what's happening is happening. The solution is to get the fish a bigger tank with a full lighting set up and a continuously running filter. This will establish good bacterial colonies, filter out the toxins, and oxygenate the water. Your fish will perk up and start looking a lot better. I bought a 5 gallon hex tank from walmart in the past for a baby tank, but I've also used it for a beta, and it did great. It played in the water return and was very active. I found the beta I put in my 35gal tank to be very active as well, constantly swimming the entire tank in all columns of the water. I hope this has helped with your issue.