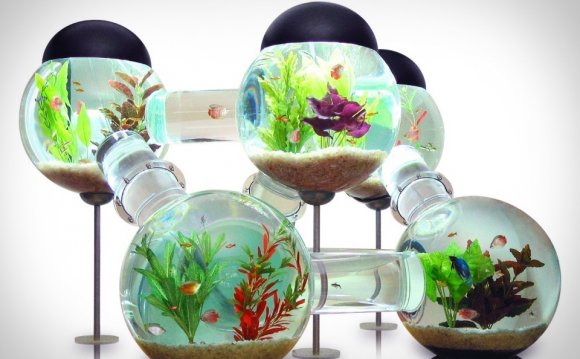 The Labyrinth fish, also called Anabantoids, are distinguished from all other types of fish. Most fish receive oxygen by passing water through their gills. However these fish possess an additional respiratory organ called the "labyrinth organ", which gives them the distinct ability to breath oxygen.

These fish can breath atmospheric oxygen in the event the water they live in becomes depleted of oxygen or polluted. They can survive in shallow waters and even dried ponds as long as they stay moist. As long as they stay humid they can survive for hours outside of water. They can even search for new water since they can “walk” on their pectoral fins. One species Anabas testudineus is said to even be able to climb trees, and so is known as the Climbing Perch.

Labyrinth fish also have a fascinating brood care. They range from bubble-nests builders at the surface of the water to nest building in underwater plants, and some practice mouthbrooding. In an aquarium you can see a cluster of bubbles on the top of the water. Once the female lays the eggs, the male will pick them up in his mouth and put them in his bubble nest. The male will continue to guard the eggs until they hatch.

Anabantoids are generally hardy fish and many are great for the beginner. Some of the best known examples of labyrinth fish are the Gouramis, the Bettas including the popular Siamese Fighting fish, and the Paradise fish. They usually prefer slightly acidic water but with a low current that won’t disturb their bubble nests. Most like a well lit planted tank, but with some floating plants and a few hiding places created with rocks or driftwood. They will usually readily accept aquarium foods like flakes and tablets, as well as enjoying supplements of brine shrimp and various types of worms.

The Labyrinth species list below includes popular types as well lesser known varieties. Each fish guide has a description of the species, its place of origin, habitats and behaviors, as well as fish care to successful maintain them in an aquarium. Fish pictures are also provided within each fish guide to help with identification, and to aid in choosing the best type of Labyrinth fish for your freshwater tank.

The majority of the Labyrinth fish are found in Asia throughout the south, southeast, and eastern portions of the continent inhabiting warm, slow-flowing, low-oxygen waters. They also occur in tropical rainforest waters on the lower half of the African continent.

These are relative newcomers in the world of fishes in terms of evolution. They all have the common characteristic of having a supplementary respiratory organ called the "labyrinth organ". This organ gives them the distinct ability to breath oxygen.

This type of adaptation probably first developed about 50 to 60 million years ago. One gourami fossil has been found in the lake-bed shales of Central Sumatra. It was tentatively ascribed to the Giant Gourami Osphronemus, but it is unknown if fossils occur in Africa.

Fish have gills and they receive oxygen by passing water through their gills. Labyrinth fish also use their gills, but can also obtain an additional oxygen supply from the atmostphere. The labryinth organ is located in the head just behind the gills. It looks like a maze which traps air in its’ many folds. These fish will to go to the surface to gulp air. The oxygen from this air finds its way through the maze and is then absorbed directly into the bloodstream.

The gills in these fish can be greatly degenerated and the labyrinth organ can vary in size. The organ size is dependent on the oxygen content in the waters where each fish lives and is acclimated to. So from one fish to the next, the size of the organ will be different.

Labyrinth fish belong to the large order of Perciformes known as perch-like fishes. This is the largest order of the vertebrates. It contains at least 18 suborders with around 160 families of fish of all sorts and sizes.

They are also known as Anabantoids as they belong to the Anabantoidei suborder of Perciformes. There are three families of Anabantoids. These include the Osphronemidae family which contains the largest group of Gouramis. Then there are the Climbing Gouramis in the Anabantidae family and the Kissing Gouramis of the Helostomatidae family. Currently there are 20 genera containing about 128 described species and at least 7 that are not yet described.