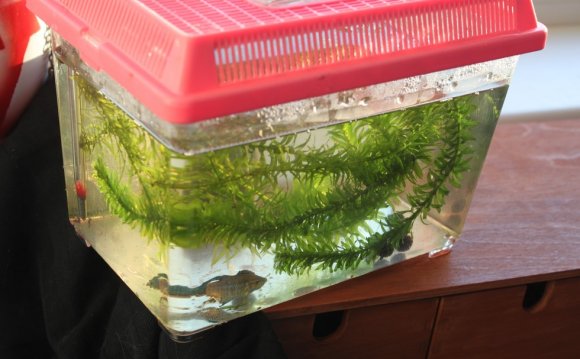 As a pet store owner, I deal with a lot of questions about people’s pets. Every week, I take at least one call from someone whose fish—or whose child’s fish—keep dying. Many fish die because their owners don’t know about three very easily solved problems: overstocking, overfeeding, and overcleaning.

Overstocking
For every gallon of water in a tank with a filter, you can keep 1 inch of slim-bodied fish or ½ inch of fat-bodied or deep-bodied fish.

Fish produce waste, which breaks down into ammonia. In a filtered tank, there are bacteria that digest the ammonia and produce nitrites. Other bacteria digest the nitrites and produce nitrates. Each of these compounds is progressively less toxic to the fish. If there are too many fish in the tank, the filter will not be able to carry a big enough culture of bacteria to handle the waste load. Ammonia will build up in the tank, and fish will die.

Begin a new tank with about 20 percent of the maximum possible fish population. If those fish are still alive in 2 weeks, you can add another 20 percent. Stock to 80 percent of maximum to allow for growth.

Overfeeding
Feed fish what they can eat in 2 minutes, maximum. If they leave any, feed less the next time. Several small feedings are better than one large one.
Uneaten fish food begins to break down in the water, creating an extra load on the filter. If there is too much uneaten food, the water becomes toxic. Fish die.

Fish are liars. They will tell you they are starving 2 minutes after they’ve eaten. Don’t be taken in. A small feeding in the morning and another in the afternoon or evening are all that they will need.

Children love to feed fish; handfuls of fish flake, cake, milk, spaghetti, and other people food. They want to share. Unfortunately, it’s not good for the fish.

Overcleaning
Change 10 percent of the water once a week, or 25 percent once a month. Pick one, and do it.

Now and then I get this phone call:

“I just cleaned my tank, I took everything out and put in all fresh water and a new filter, and I even scrubbed the gravel. Now my fish are all dying. What’s wrong with them?”

This kind of cleaning is fatal to fish. The tank has been established, the bacterial culture has built up to the point where it can handle the load of fish waste, the fish are not being overfed, and everything is fine. Then someone cleans the tank, removing the digestive bacteria. Suddenly the tank has become a toilet, and nobody is flushing. Ammonia builds up, and fish die.

How often should you completely clean out a fish tank? Never.

For good tank maintenance, do regular small water changes to remove the nitrates. Changing half or three-quarters of the water every 6 months doesn’t have the same effect. Topping up a tank to replace evaporated water is not a water change.

If algae is a problem, introduce an appropriate algae eater or simply scrape the algae off the glass with a bladed scraper or a scrubbing pad.

Remember the inches-per-gallon rule when stocking your aquarium, and stock it gradually to the maximum level rather than buying all of the fish at once.
Feed your fish sparingly; it is better for them to miss a meal now and then than to be overfed. A tank will not suffer for going unfed over the occasional long weekend.

Do regular water changes to maintain good water quality. Change your filter sponge once every 4 to 6 weeks.