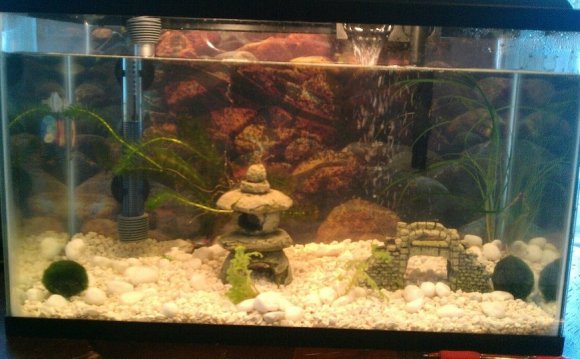 This is one of those questions that crops up a lot. If you are an Oscar fish novice then it can be quite disturbing if your Oscars start scrapping. It's not very nice seeing two fish beat each other up, especially if they end up removing patches of skin. If you keep two or more Oscars then it is very likely you are going to see them being rather rough with each other at some stage. Even if you only have one Oscar, you might one day see it attacking the side of the tank. This is properly due to the fact that it can see its reflection and probably thinks that it has a rival.

Oscars fight in various ways, they may push each other around and will often lunge at each other as well. One of the most common forms of rough behaviour you will see is called "jaw" or " lip" locking. This is when they face each other head-on and try and grab hold of each other's mouths. Even extremely young Oscars as small as 2 inches will jaw lock occasionally. This is often how they test each others strength. If you do see them doing it, don't get too worried, it is very common. Many people panic when they see Oscars performing this kind of behaviour and sometimes even go to the extent of splitting them up. I would urge you to hang fire and just observe what is going on. Even if the Oscars do cause each other a few scrapes, don't be too hasty and split them up straight away. Observe their behaviour and see what they do in between these bouts of violence. From my experience, if they are nice and friendly and hang around with each other most of the time then you really shouldn't have anything to worry about. If it is obvious they just don't like each other then drastic action may be required if serious injuries are being caused.

Oscars have been known to kill other Oscars in the tank. It is not a common occurrence, but it can happen. Also, Oscars that have lived together for a long time have suddenly been known to fall out and start fighting, why this happens is anybody's guess.

Lip locking, chasing each other around the tank, and other forms of rough behaviour can often be a pre-breeding ritual. People often get very excited when they see their Oscars doing this. Unfortunately, there is only one sure way of knowing you have a breeding pair, this will be when you actually see eggs being laid and the male fertilising them. Once you have observed your Oscars doing this a couple of times, you will know what signs to look for. You will know that when your Oscars jaw lock, they are not doing it out of aggression. It is probably worth mentioning that occasionally even a breeding pair of Oscars may get annoyed with each other and have a little scuffle. However, this doesn't normally end in serious injury. There may be a few cuts and bruises but if you keep your water in good condition, these will soon heal up.

In the wild, fish often have their own territory which they vigorously protect against intruders. If you are experiencing aggression where one Oscar is picking & bullying another, it may well be a case that he has claimed territory over the tank. Sometimes rearranging things in the tank, i.e. moving ornaments, wood, rocks can help reduce aggression problems because the environment changes radically and an Oscar may not recognise what was once his patch, so to speak. This may give the other fish a chance to claim some territory for themselves rather than getting picked on wherever they are in the tank. I don't think this is a tried and tested way of stopping the fighting and aggression, but it is certainly worth a try if you really don't know where to go.