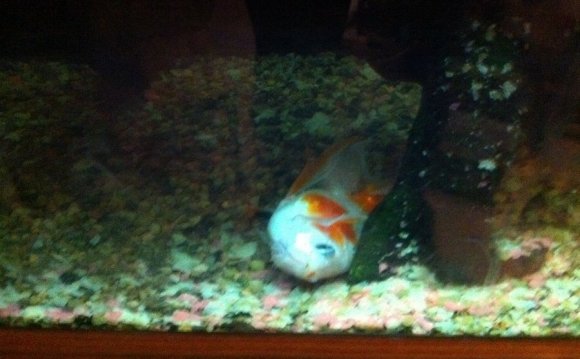 A couple of things to look at are tank size, temperature, and location.

If that's actually the size of tank, its too small. While they do 'rest' a lot, bettas are actually fairly active fish. Watch them sometime in a big planted tank. They are very curious creatures, and like to explore and peck around for something to eat and/or chase. In a small tank like that movement is restricted - especially laterally. There's just no place for him to go.

Also, a cold betta is less active. If the temperature of the water is below 76-78-ish, bettas will slow down and become less active. So you may need a heater. But, that bowl may be too small for even the smallest paddle heater. Pet shops sell small thermometers that can attach to the side of the bowl to help you monitor that.

The other thing to consider is boredom. Bettas are, by fish standards, pretty intelligent. If the betta is stuck over in a corner or in another room away from the action... he's going to get bored. They like stimulus. Move them someplace where's there's some activity. This way there's some big splotches of colors moving around them to stir them up occasionally.

Also, last issue - do not use distilled water. That is very different from the water they are used to. You might use bottled spring water (not purified water). But I've seen little difference in how bettas react to spring water and plain (dechlorinated) tap water. But, every area is different so it really depends on what your local water is like.

My personal recommendation for a happy betta... I would not keep a Betta in anything less than 1 full gallon. Generally the bigger the better, but I have had some that had trouble adapting to bigger tanks after living in a cup for their entire life. I keep mine in 5 gal tanks with small in-tank filters & heaters, plants, and in the center of the house so that there's always a lot of movement for them to watch. Partial water change every week (I just scoop some water out and replace it). They are very active fish... sometimes a bit too active (mine will sometimes jump at me as I walk by, so I never fill the water to the top. Many a betta has found their end by jumping out of their own bowl).