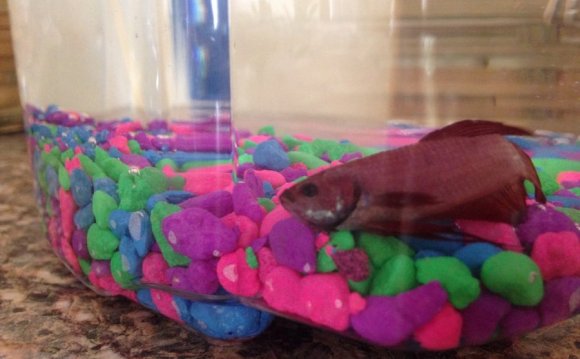 I have had a red betta for almost a year now, and recently he has been sitting at the bottom of the tank on top of the rocks that I had put in.

Usually, he is very energetic, and every time I come to feed him, he gets excited and swims around the bowl because he's hungry and wants to eat. Last week I was very busy and did not have much time to clean the bowl so it did end up getting dirty. Now he will not eat, and just lies at the bottom of the bowl. When i did have a chance to clean the bowl i put him back in and he swam in a rapid circle around the bowl, but went and layed on the rocks right after.

I'm really concerned that this is life threatening for him. Thank you for taking the time to read this and hopefully you can help me out.

welcome. lets try and get this little guy back to feeling 150% again. Now when you said you couldnt clean his bowl you mean? when you do clean his bowl taking him out everytime causes alot of stress on a fish which makes ther immune system drop thus making them more vulnerabl to disease and parasites. Now how often do you change the water and when you do how much do you take out and replace. Please describe how you "clean his bowl" id like to know exactly how you do it, it may help me help you. please answer these questions asap for we may not have a whole lot of time my friend

As mentioned above taking the fish out of the bowl is not good. Using cleansers to clean the bowl is not good either. A simple 10 to 25% water change once a week will do the trick. Make sure you use water conditioner when you put new water in. Each time you deep clean the bowl you kill the bacteria that makes it cycled. Do 25% water changes every day to keep the ammonia and nitrite down while the bowl recycles. This will also help get out any cleansers you possibly put in there.

Note if the rocks aren't aquarium approved and you put them in recently they may be causing the illness.

Something I have noticed about male bettas and has been discussed on this site before is they don't eat for a week after being transferred to a new tank. But they are still usually pretty active.

I was very busy, so I would feed him everyday, and I saw his bowl getting dirtier but I didn't have the time to clean it.

Usually when I clean his bowl, I do it every week, (or if I see it getting dirty), and I do end up changing all of the water. (Thank you for letting me know this is wrong) When I clean it, I put him into a different bowl, and I wash out the bowl he was in. I also rinse the rocks to make sure there is no junk down there that might make him sick. When I'm done, I replace the water and put him back in. I give him a tiny bit of food too.

He is normally fine with this procedure and goes back to normal right after.

Bettas are pretty tough in general on what you can do to them and not kill them. Something went wrong this time around. I'm pretty sure he will be fine but don't quote me on that, give it a couple days.

This is recommended for intestinal problems but deshelled smashed up peas seem to be a fish favorite, it's a fish laxative so it's not recommended for every day feeding but your betta may try to eat some of it. All my fish love the peas when I put them in there including the bettas that are primarily meat eaters and don't usually eat plants. If the problem is intestinal and he does manage to eat some of it then it may clear up the problem. However, I think chances are some how he got an external injury in the bowl transfer that he's not very happy about.

Hopefully, he will recover soon.

Just a few minutes ago actually, I moved something off of my bettas table, and he gathered up strength and moved to the top of the water where I had placed some food earlier encase he did want to try to eat. When he got to the top, he grabbed for the food unsuccessfully, and then when he didn't get it, he let himself sink to the bottom again.

Could it be possible he just doesn't have enough energy because he hasn't eaten in a few days?

Fish should be good for about 6 days without food. I went on a 4 day vacation and didn't bother to setup any feeding arrangements because it is far worse to have a machine feed them or an inexperienced person feed them than to let them go without for a few days. But keep in mind that I have an established tank and proper lighting so the tanks do grow some food for the fish to eat.

You may try lowering the water in the bowl so he doesn't have to swim so high for food or air. The fact that he is trying to eat is a good sign, now you just have to get food to him before he starves.

Ok, I do have to go to school, but the second I get home tonight I will lower the water a bit and try the pea. Maybe it will spark his appetite a bit more. I'll let you know what happens there.

Also, 1 thing I noticed this morning is that he has white bubbles all over his sides. And after he attemped to eat the food at the top, he swam around the bottom on the rocks and then went and layed on his side again. Not sure if this means anything.

Thank you so much for your help!

What do the white bubbles look like. are the small and powdery (Parasite), are they big and fluffy (Fungus or Bacteria)?

A fish laying on it's side is never usually good. I was unaware of that it's condition was that severe.

My current thoughts are the replacement water was to cold and lowered his immune system, and somewhere in the transfer he picked up some fungus or bacteria that he can't fight off.

So my recommendations are light, heat, and quarter dose of aquarium salt. To help correct the fungus/bacteria issue. If that is what it is.

The bubbles are small to me, but then again I know nothing about this. I do happen to have a picture of him that I took before I left my house this morning, and the bubbles are hard to see, but if I can get myself to a computer I will upload it so you can see the condition he is in. I am really hoping that I will be able to help him in time.

Would the swimming on the rocks be him scratching do you think?

Apparently I should not own a fish if I could let him get such a severe condition.

I just got home, and I've went to see if my fish has made progress.

I've noticed the white bubbles have disappeared, and he's a little bit more lively than he was this morning. He is not laying on his side anymore either.

I have lowered his water like you have suggested, and I have been trying to get him to eat a pea. He does not even acknowledge that there's food for him now. I had to drop a tiny piece of pea into his mouth, which he ate, but I don't think that is enough seeing as he hasn't eaten in days.

Male bettas don't eat a lot. The pea will be enough to carry him for several more days but you should still try to get him to eat at every normal feeding time.

My male betta only eats 1 or 2 tiny betta pellets a day. Even when I move him and he stops eating it seems to be enough for him.

This is good to know because I just tried to feed him a flake, and he put it in his mouth, but then spat it out. Ill wait a bit and then try and see if he will eat a grub.