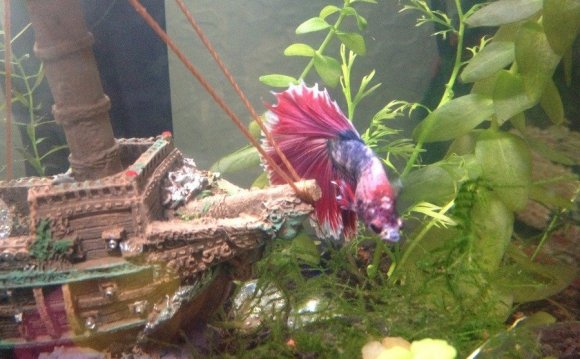 A: Woaw, we sure are getting a lot of mail from Canada :). Well, that's cool. Glad to see bettas have their fan club north of our border hehehehe... Come to think about it, I have received emails from the 4 corners of the world, as far as India, Africa, Australia, Japan, Europe, America... I said it once, I'll say it again: It is a betta world invasion hehehehehehehe... Soon the entire globe will be under their dominance.

Before I tackle above question, I wanted to thank those of you who have emailed me regarding last week's column and said that their bettas make noise too. I am convinced this is a conspiracy to make me doubt my sanity. But it didn't work! hehehehehehe. This is why: You guys mentioned was that your specific bettas made a noise when they went up to take a big gulp of air. This is not unusual because the large air bubble released during this maneuver will pop up when it reaches the surface and make a 'pop' sound. However, what puzzled me about Eric's story is that he said that his betta will be sitting quietly at the bottom of his bowl when the noise occurs. Now it could be that Eric did not explain things very clearly and perhaps his betta is in deed coming back from a trip to the surface and perhaps releasing a last air bubble after the fact. At any rate, I am going to say that I do not believe that labyrinths can make noise. What you are hearing is the bubble popping at the surface. Of course, I could be wrong, I am after all, as you all have attempted to demonstrate, pretty insane, and it is not getting any better with ageee and ifkh fwoyrb fdhd do f heohd adfvtpqjsd...

Ok, now moving on to our next topic: Bettas who sing opera. Wait. No, that's next week's column LOL. Bettas with tails that split in two. Are we witnessing a multiplication of the tails? Are tail cells splitting themselves and if so, can you then end up with TWO bettas? Mmmm... So many interesting questions...

Well William, it is not unusual for male bettas to tear their tails. Tails can become damaged one of several ways:

In short, your betta has split his tail in half, probably due to over activity and the tail getting too long. Is it bothering him? No. Is it hurting him? No. The only thing that got hurt is his ego LOL. In time, the two pieces should fuse back together. Nonetheless, to prevent possible bacteria from settling into the area, I recommend you add bettamax to his water for about 4 weeks. If you do have plastic plants in your tank, make sure that:

This would be good place and time to say: NEVER PUT CORAL IN YOUR BETTA BOWL / TANKS!! For many reasons, one being that corral will raise the PH dramatically (a bad bad thing) and also bettas can shred their fins on the sharp edges. Some rocks can have the same destructive effect so pick accordingly!