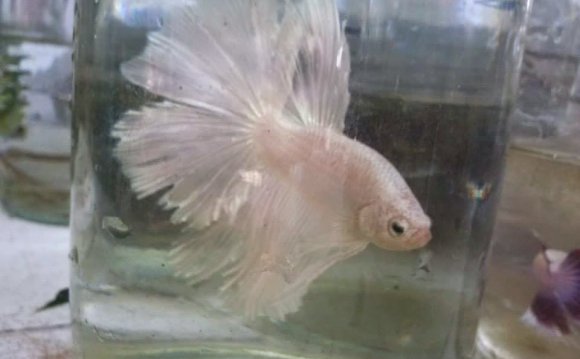 COLUMBIA — Three Missouri offensive linemen wanted to appear on the Memorial Stadium video board. At halftime, the board shows photos of players with their pets.

But none of the linemen had pets.

"No, but we can go get one, " offensive lineman Alec Abeln said to Hall. "If we got like a fish, could we get on the video board?"

Hall approved. Starting offensive linemen Kevin Pendleton, Paul Adams and Abeln exited the Mizzou Athletic Training Complex facility, hopped in the car and sped to the closest PetSmart. They needed to be back in time for team meetings in 30 minutes.

"We need your help, " Pendleton said to a front desk woman. "We need to buy a fish in 10 minutes."

She suggested they purchase a snake, but it was too expensive, so they walked toward the aquariums. There was a red and white half moon Betta fish with a tint of gray and purple accents on the top fin.

"I had never seen anything like it, " Pendleton said. "It's a pretty fish."

Each spring, some offensive linemen either graduate or retire from football. Their nametags are removed from lockers and added to a growing collection, which offensive line coach Glen Elarbee calls the "boneyard."

Boneyard only cost eight bucks, but the three linemen spent an additional $53 accessorizing. They bought two fish tanks, gravel, a mini skull and an R.I.P. sign to honor the locker room’s boneyard of "fallen brothers, " as Abeln calls it.

Eager to show their position group its newest member, the linemen sped back to the football facilities with only 10 minutes to spare before their next meeting. They placed Boneyard on a table at the front of the offensive line room, then hurried into a team meeting.

"(We thought) it would be really fun to get an o-line pet, " Abeln said. "It kind of made coach (Elarbee) laugh a little bit, when you walk in the room and there is a fish bowl on the table."

The fish was an instant hit with Elarbee and the other coaches, but taking care of Boneyard hasn't been easy.

Early on, Abeln, Pendleton and Adams met with their fellow linemen to explain the proper steps of caretaking — changing the water frequently, transporting Boneyard between tanks and feeding him a pellet of food or two at a time.

A few days later, the three linemen checked on Boneyard.

Dozens of food pellets had sunk to the bottom of the tank, and the water had turned murky. Luckily, he was still swimming.

"We were figuring it was the freshmen, " Abeln said. "We were about to chew into some of these freshmen, but it was (Tyler) Howell just innocently feeding the fish like 20, 30 pellets."

Howell must have missed the meeting for Boneyard. Even after the early mix-up, taking care of the fish while managing practices, work-out schedules and meetings has been demanding for the group.

One day, the tank looked so contaminated that Elarbee changed the water.

"He's a fighter, " Abeln said of Boneyard. "The tank looks 'Finding Nemo' dirty at times. He has just found a way to keep on keeping on."

Since those early oversights, the offensive linemen have checked on Boneyard every day to ensure he is healthy. He has stuck with them through the rigors of fall camp and the team's first three games.

Adams said he has dedicated the season to Boneyard.

The offensive line group has friendly wagers on how long the fish will live. Some say he won't survive past Oct. 5, while others think he has a chance to make it through the season. The three seniors hope to make the video board with Boneyard during one of Missouri's upcoming home games.

"Some guys just aren't rooting for Boneyard, but he is a survivor, " Pendleton said. "I know I am going to make sure to do everything in my power that he is going to last forever. That's my baby."

Do you like what you see? The Columbia Missourian produces in-depth journalism across many platforms while coaching talented MU students. Independent reporting isn’t cheap to produce, even if it’s free to consume. Every dollar you donate is a gift for life because we touch only the interest earned. We hope you’ll help: Donate or subscribe.
Source: www.columbiamissourian.com