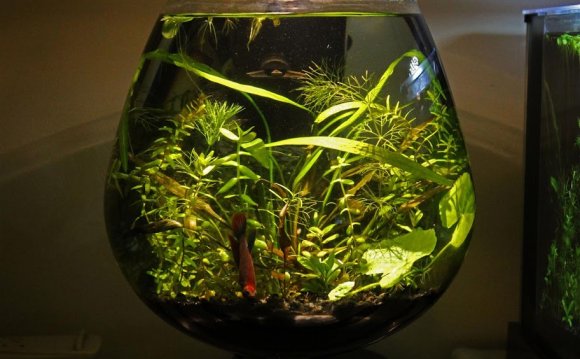 The Fauna of the EcoQube

The EcoQube was designed to be the perfect desktop ecosystem bringing the cooperation of nature to your office, kitchen or bedroom. The EcoQube contains the ideal blend of plants, animals, and even microbes working together to improve the ecosystem for the benefit of all, your home and office included.

This week we’ll look at the most common fauna of the EcoQube, the betta fish, amano shrimp, and nerite snails, and see what they bring to the ecosystem and the best way to care for them.

The most popular fish to keep in your EcoQube is a Betta Fish. There are many reasons for this, not the least of which is that these guys look amazing in a tank. Hundreds of years of selective breeding has given betta fish their characteristically long, flowing fins and bright colorful scales.

Native to the shallow streams and rice paddies of Southeast Asia, Bettas are a tropical fish, happiest in warm water, around 73° to 80°. Some tanks in warmer climates may be enough, but generally betta fish will appreciate a heater for your EcoQube (instructions for installing a heater into your EcoQube).

How much to feed your betta and how often depends on the type of fish food you have, so refer to individual directions. For the most part, however, feed your betta only what it can eat within 10-20 seconds, about every other day.

Betta fish also love plenty of hiding spots. Tight corners, little caves, dense foliage are paradise to a betta fish that needs enclosed spaces to feel relaxed. We like to use the Mountain Stone and some Anubias (both available to order from our store) to create plenty of natural crevices for our betta to hang out in.

The most common illnesses in aquarium bettas would be Swim Bladder Disease and Fin Rot. Betta fish are unique in the sense that they have what is called a Swim Bladder, an organ just under the gills that allows the fish to control its buoyancy. When this bladder becomes bloated, the fish will rise uncontrollably to the surface. 9 times out of 10, this happens due to overeating. The best cure is to not feed the fish for 3 or 4 days, until he returns to normal, and limit his food intake when you do feed it. Remember, the betta’s stomach is roughly the size of its eye, it is very small and does not eat much.

Fin Rot, a blackening of the edges of the fins, comes about as a result of ammonia build up in a tank. Luckily, for EcoQube owners, it is quite impossible for ammonia to build up in an aquaponically filtered fish tank. While dangerous to a betta, ammonia is nutrients to a plant, and it will absorb it through its roots.

When you first get your fish, it’s very important to acclimate it to its new habitat. The ecosystem of your EcoQube should already be up and running at this point, so add a cup of your EcoQube’s water to whatever container your Betta came in before taking it out. Let it adapt to this water for about an hour before pouring it into the EcoQube. Once you pour the betta into the EcoQube, your fish will enjoy one of the healthiest environments possible. The betta in the picture below came was imported and we placed it in one of our EcoQube, just look at the difference in 4 weeks.

While fish you get from some pet stores may not be kept in ideal conditions, we strive to make sure every animal we keep and sell are as healthy as possible before we ship it to you. Here’s a link to an update describing our process.

Invertebrates can be a unique and beneficial addition to your EcoQube. In addition to adding more life to your ecosystem, these little guys will actively clean the interior of your tank all the while requiring zero maintenance.

Amano Shrimp are the most popular variety of dwarf shrimp for the EcoQube. Their primary diet is the algae that will naturally grow in any aquarium, cleaning your tank and feeding themselves. A pretty sweet deal for the human in this ecosystem. These shrimp are also very active, adding an energy to the EcoQube as the dart back and forth foraging through your tank. An EcoQube is suitable for about three dwarf shrimp, any more would over shadow the betta, the star of the show. Like all shrimp, Amanos will molt their outer shell periodically, so don’t be alarmed when you see the shell of a shrimp at the bottom of your tank. It will naturally break down through the filter and provide nutrients for the plant.