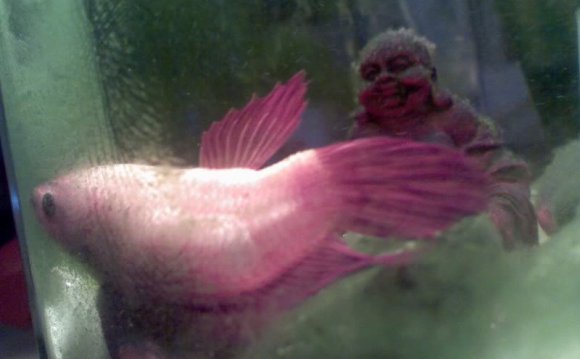 Swim Bladder Disorder is an extremely common betta ailment, and it typically looks worse than it actually is. I know, you're probably sitting there watching your poor betta flop around, struggling valiantly to make it to the top for air, and basically looking nothing like his usual graceful self, and thinking to yourself, "This is it, I'm going to lose him." Let me make you feel a little better before I get into all the details - Swim bladder problems are not contagious, they don't seem to be painful, they are generally easy to treat, and they are usually not even close to fatal. Feel better? Good, let's get on to the fun stuff.

Either floats uncontrollably to the top of the tank, or sinks to the bottom.
Seems to struggle greatly while swimming, and often will swim at an unusual angle.
May or may not have a "kinked" spine, often in the shape of an "S" when viewed from above.
May lie around, barely moving except when a mad dash is made to the surface for air.
May or may not have a swollen belly, often caused by constipation

Swim Bladder Disorder can be caused by several things, and it's best to try to figure out the cause of the problem because the cause will determine what treatment you will want to use. As always, I recommend isolating the ill betta for treatment if you have him/her in a community tank. While Swim Bladder Disorder isn't contagious, isolating the betta will make monitoring and treating the condition much easier on you (and will give the sick betta much needed "quiet time" to recover). If your betta is having a hard time getting to the surface for air, it is often a good idea to lower the water level to make things easier on him. Just remember if you do this that you have much less water volume than before and water changes must be increased to keep him in good health. Below is a list of things that can cause Swim Bladder Disorder, in order from most common to rarest.

Overfeeding - If your betta is displaying symptoms of Swim Bladder Disorder immediately after feedings, and the symptoms tend to go away after a few hours, you are probably overfeeding. It is helpful to remember that bettas only have stomachs approximately the size of one eye, so try to feed smaller meals several times a day instead of one giant meal once a day. That is the treatment for Swim Bladder Disorder caused by overfeeding in a nutshell, not too hard, eh?

Injury - Sometimes bettas who have recently been through a traumatic experience (being dropped on the floor, being in a physical fight with another betta, etc) may display Swim Bladder Disorder symptoms. In these cases, many times there is permanent damage to the swim bladder. Unfortunately this means that there is no real cure for the disorder if it is caused by injury, but you can manage the illness. Often bettas permanent swim bladder problems can live normal, healthy lives if accomodations are made - such as keeping the water level lower than normal to allow for easier access to air, or providing large-leaved plants near the water surface to make a "lounging" spot where launching off for air is more doable for the betta. Swim bladder problems are not painful and are generally not fatal in the case of injury, so these guys have a wonderful prognosis in general.

Birth Defects - This is one of those rare and yet common causes. If you are a betta breeder, it is extremely common to get some fry with congenital swim bladder problems. If you are someone that "collects" bettas from petstores, it would be extremely rare to find a betta whose swim bladder problems are caused by birth defects as usually wholesalers that supply the bettas will destroy fish with birth defects before they ever make it to the store. As in the case of injury, birth defects are really not curable but they can be managed so that the bettas can live normal, happy lives...if less graceful lives than non-damaged bettas.

Bacterial Infections - While I have never personally seen a case of Swim Bladder Disorder caused by a bacterial infection, some fishkeepers that I respect very much have, and so I will list this as a possible cause of swim bladder problems if nothing else seems to fit. I have always heard that swim bladder problems caused by bacterial infections are incredibly difficult to treat, which makes me wonder if they are not caused by something else altogether...just my random musings. If you are convinced your betta's swim bladder problems are caused by bacterial infection (or are sure that none of the other things i've listed above could be causing it), you may want to start treatment with a good broad-spectrum antibiotic such as Kanacyn (Kanamycin sulfate), Spectrogram (Kanamycin sulfate and Nitrofurazone), Tetracycline, or Furan 2 (Nitrofurazone). Again, I have not ever witnessed a bacterial swim bladder infection, so these medications may or may not work and I would exhaust all other possibilities before treating with these medications.

Almost anyone who keeps bettas will have to deal with a swim bladder problem or two in their betta-keeping career. It is one of the top three betta ailments along with finrot and constipation. That being said, there are a few things you can do to reduce your betta's chances of contracting Swim Bladder Disorder in the future.

Swim Bladder Disorder is almost always caused by overfeeding or constipation. Remember that a betta's stomach is only about as big as his eye, and feed small meals several times a day instead of one large meal. Remember to feed bettas with nutritionally sound foods and don't go overboard on fatty foods such as bloodworms to avoid constipation.