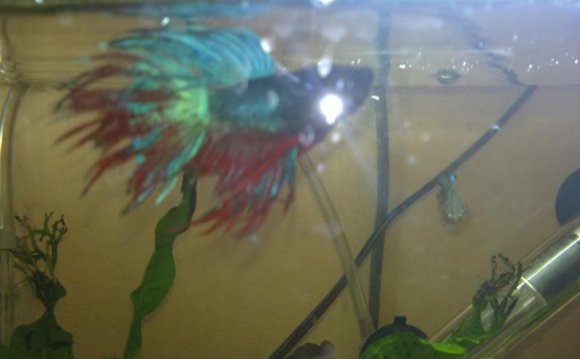 By: Setsuna
Photos by Victoria Parnell
A guide to the different tail and fin forms available in Betta splendens

When I was little, my mum would ask me if I wanted to go down to the shops with her. My answer was always yes, on condition that while she did the shopping I could spend the time in the pet shop watching all the pretty fighting fish. As time went on, I eventually was able to bargain with my mum that if I could keep a pair of goldfish alive for a year I could get a fighter for my seventh birthday. She agreed and so I spend the next year of my life caring for those goldfish like a child possessed.

When the time for me to get a fighter arrived I was so excited! Mum took me to the pet shop and I picked the prettiest one there. His name was Rainbow. I didnt know at the time, but he was a red veil tail. From that moment on I was hooked. As I was banned from having a tropical tank by my mother, she believed they costed too much to run, Rainbow and all that followed had to live in cold water.

Since those early days I have owned many veil tails and learnt, through trial and error, most of what I know today.

Betta Splendens now come in a plethora of colors and fin types. This article is here to help you to distinguish a halfmoon from a super delta.

The most widely-available longfin form in bettas is inarguably the Veil Tail Betta (or VT). This is the natural form the fins take when they are artificially lengthened from the wild shortfin form with selective breeding. This is the type of fins usually seen in pet shops. Though attractive in its own right, it is generally considered undesireable among those breeding for show-quality form. In fact, the IBC (International Betta Congress) doesn"t even have classes for Veil Tails any longer, and it has become a sentiment of negativity to describe any high-bred Betta of "going veil-ish".

You don"t see Spade Tail Bettas very much anymore, though they were more easily found in the early "90s.

This tail form is pretty basic; the caudal has a wide base that narrows to a delicate point, like a spade.

Breeding DT into regular single tail or HM lines is widely practiced because of the advantages the gene brings, such as wider dorsals and better branching. It is always recommended to cross DT to a single tailed type only, since DT x DT often produces deformed fish.

These tails are overwhelmingly prevalent, yet they are rarely called by what they are. Roundtails are single-tailed bettas with rounded edges, and are often confused with the delta tail and even the super delta tail. Even when not given the mistaken terminology, you will not often find them listed under Roundtail, but under ST - "Single Tail".

Delta Tail is a term often misused to describe any single-tailed non-HM betta. The true Delta tail has straight caudal edges like a HM or SDT, but they extend outwards from the back of the fish and don"t arch straight up into HM. Delta tail does have a solid genotype, meaning spawning delta to delta will produce all deltas, with perhaps a few super deltas and even halfmoons.

This form is also known as Super Delta, SDT, or HMx. It is basically an enhanced version of the standard Delta Tail, and some are just shy of being full HM. This is a very beautiful tail, and often more pleasant to have than HM, since there are not as many worries about the tail collapsing, or the fish having difficulty in swimming and spawning, or blowing fins. They are also available much more reasonably than true HM, and will usually produce some HM offspring if they come from a HM spawn.

Few people disagree with the above statements. The only area of disagreement, or rather a difference in opinion exists in the "proportion", i.e. the caudal/body ratio. When caudal/body is less than 1, you get an "oval shape"(OS). But when caudal=body or caudal/body is 1, you have a "circle"(CS). The OS Halfmoons are good, but the CS Halfmoons are truly exceptional, and an excellent model to aspire to.

The quest for the perfect halfmoon by selectively breeding for branching and straight caudal edges has given rise to a new development in the Betta splendens tailforms - the Rosetail.

The main characteristic of the rosetail is the excessive branching in all three unpaired fins, especially the excessive branching and the overlapping rays in the caudal, which produces a "rose-like" appearance. The extreme form of Rosetail can produce the very unique "Feathertail" betta. A breeder using Rosetail bettas in their halfmoon lines has to be particularly careful of excess - fish who cannot swim properly, or who carry the trait into the mutation that has been coined "X-Factor Fish" - fish with poor scales, shorter ventrals and collapsing fins.

The Plakat (pronounced Pluh-COT, not "plackit") is just the shortfinned version of the common Betta Splendens. There are wild-type plakats (which look like the bettas caught in their natural habitats), Traditional Show plakats (symmetrical wild-type fins with some enhancement), Modern Show plakats (multi-branching caudals, extended dorsals, longer anals/ventrals, cultivated colors) and Fighter plakats (bettas that have been selectively bred for fighting ability, such as aggression, sharper teeth, harder scales and longevity).

Plakats are generally more active than the longfinned version, not being hampered down with excessive fins. This, along with their resistence to disease, makes them a favorite among Betta enthusiasts and collectors.

The Crowntail was founded 1997 in West Jakarta, Slipi, Indonesia. The webbing between the fin rays is reduced, producing the appearance of spikes or prongs, hence the name "Crown Tail". The crowntail trait can be found in bettas of any tail type and shape. For instance it can be seen in VT, D, SD, HM and DT. The ideal according to IBC standards is a fish with a perfect 50% reduction in all three unpaired fins (caudal, dorsal, anal) that can spread to 180 degrees. The crowntail gene is partially dominant, affecting the offspring as early as the F1 by producing an intermediary webbing reduction ("Combtail"). CT x CT will produce 100% CTs

Combtail and Half Sun Betta

The Combtail Betta is a fringe-finned type that usually arises as a result of a cross between a ST (singletail, non-fringe betta) and a CT (crowntail, fringe-finned betta). Instead of having the minimum 33% reduction in webbing that designates a true Crowntail, the Combtail has a slightly spikey appearance.

Breeding CT x HM has also given rise to the development of what is commonly called a HALF SUN - Combtail Halfmoon. This is a very beautiful type.