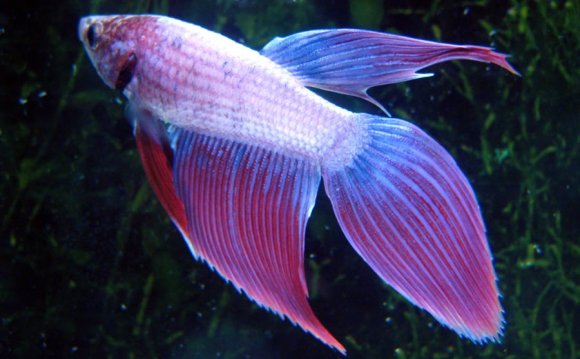 Live-bearing species of fish like guppies and swordtails are notorious for breeding in the community tank. If you want to breed these fish on purpose, however, there are a few tips you might want to know.

There are a variety of different species of live-bearing freshwater fish and most of them are fairly hardy in the home aquarium. One of the most well-known species of live-bearing freshwater fish is the guppy. Guppies are known for their long fins and bright colors – they are also known for reproducing frequently and without any encouragement from the aquarium hobbyist.

Other popular types of live-bearing species of fish are swordtails, mollies and platies. These fish come in a variety of colors and patterns and, for the most part, they are easy to care for and easy to breed. Swordtails are easy to sex because the males of the species develop a long, sword-like extension of the caudal fin. Mollies and platies are great community fish and, like swordtails and guppies, are peaceful by nature. Below you will find more detailed information about specific live-bearing species:

Marigold Wag Swordtail – This swordtail species is named for its bright orange coloration. Marigold wag swordtails can grow up to 4 inches in length and they are a very peaceful species which makes them a great addition to the community tank. These fish are omnivorous so they will feed on a variety of different foods including commercial foods, algae, and live foods.

Red Platy – The red platy is known for its vivid red coloration and for being an incredibly peaceful species. This species remains very small, only growing to a maximum length around 2 inches. Red platies are omnivorous by nature and they get along well with other live-bearing species. The red platy is typically farm-raised in Singapore and there are several color and fin variations available.

Black Sailfin Molly – The black sailfin molly is named for the unique shape of its dorsal fin. This species grows fairly large – up to 6 ½ inches – and it prefers hard water around 10 to 25 dKH. The sailfin molly needs a large tank at least 30 gallons in capacity and it does best with a little aquarium salt added to the water – about 1 teaspoon per gallon.

Red Fire Guppy – The red fire guppy is a very colorful species, named for the bright red color of its caudal fin. This species only grows to about 2 inches in length and it is very tolerant of small changes in water parameters. The red fire guppy gets along well with other community species and it follows an omnivorous diet.

Marble Lyretail Molly – This molly is named for its black-and-white marble coloration as well as the unique shape of its caudal fin. These fish grow up to 5 inches in length and they require a tank size of at least 30 gallons. Marble lyretail mollies are very peaceful by nature and they prefer low levels of salt in the tank.

In order to prepare your fish for breeding you will need to feed them a variety of live food, frozen food and freeze-dried foods. Feed your fish several times a day with different types of food to ensure that all of their nutritional needs are met. If you do not feed your fish a healthy diet, they may be less likely to spawn and they may not produce healthy fry. For the best results, male and female fish should be conditioned in separate aquariums and then joined together when they are ready to reproduce. When the fish appear to be in good health and coloration, they may be ready to mate – if the fish have been properly conditioned, they will likely mate quickly after being introduced into the same tank.style="float:none;">

To increase the chances of spawning, you might try raising the temperature in the breeding tank a few degrees. It may also help to keep a ratio of 1 male to 2 or 3 females in the breeding tank to reduce aggression between males of the same species. Once the fish have mated, watch the females for the telltale sign of pregnancy – the development of a dark “gravid” spot on the belly. When this spot becomes very dark, almost black, it is a sign that the fish will soon give birth.

After your fish have spawned, it is important that you remove the adult fish from the tank. Many species of aquarium fish, particularly live-bearing species, have a tendency to eat their own fry. To prevent this from happening, you should remove the adults from the tank and raise the fry on their own. Though the fry of live-bearing species are generally larger than those of egg-laying species when they become free swimming, they will still be too small to accept flake foods. The best food for young fry is infusoria – you can use an eyedropper to release the infusoria directly into the tank in the midst of the fry. In order for your fry to grow into healthy adult fish it is important to feed them often while they are young – the more you feed your fry, the more quickly they will grow.